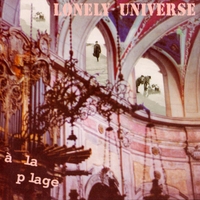 MONTREAL, QC (CANADA) — On June 18, 2014, Jazz from Rant will re-issue their pivotal recording, Lonely Universe, à la plage, one of the first recordings produced on the label, originally released in 1993.

It features Jeannette Lambert performing her poetry along with Michel Lambert, drums, and Michael White, trumpet (who had performed as a duo called Lonely Universe before this project), as well as Perry White saxophone, Rob Piltch and Reg Schwager guitars, Hugh Marsh violin, and Dianne Aitken bass flute.

The music was created when most of the musicians were living around Queen Street in Toronto, listening and performing improvised music, contemporary new music, sound poetry, industrial punk jazz and bebop. As a result, the recording is a cutting edge example of the melding of all these styles. They performed at the du Maurier Theatre Centre in Toronto and the Winnipeg New Music Festival.

The compositions are structured and yet free, exhibiting the influence on the small orchestra of their mentors at that time, David Torn and Mick Karn for some, Cecil Taylor, Han Bennick and Misha Mengelberg for others. With chains on aluminum snowsliders, haunting vocal overdubs of dream fragments, straight ahead jazz dudes playing wild fuzz guitar, each song takes on its own colour and intensity. Jeannette’s poems, described by journalist Geoff Chapman as “enigmatic, street-wise statements”, are the soundtrack of her universe on many levels, with the cinematic score provided by all the talented musicians performing here.

This album It is being re-issued in celebration of the upcoming 25th anniversary of the founding of the Jazz from Rant label in 2015.