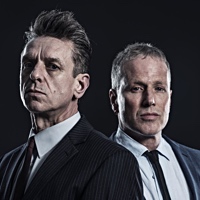 slideshow
After a break of more than a decade, singer Liam McKahey and songwriter/instrumentalist Davey Ray Moor of London- based hitmakers Cousteau have reformed as CousteauX. The album of the same name is set for worldwide digital release by Silent X Recordings on September 15. The CD is released 9/22 and the vinyl LP on 9/29.

A gold-selling act in Europe, Cousteau is best remembered by stateside audiences for the romantic yearning of “The Last Good Day of the Year” (2001), a much-loved pop hit that saw the band touring the U.S. and performing on The Late Late Show with Craig Kilborn. Since its debut, “The Last Good Day of the Year” has featured in a major TV campaign by Nissan, on the soundtracks of Happily Ever After starring Charlotte Gainsbourg and South Kensington with Rupert Everett, and in documentaries and TV programs around the world. It became a staple on NPR and enjoyed widespread success at AAA Radio.

An Irishman from Cork (McKahey) and an Australian born in Beirut (Moor) are the creative team behind CousteauX. Their friendship was kindled when they crossed paths at various squats and parties in the 1990s. Liam’s richly evocative voice paired with Moor’s jazz-influenced songwriting and arrangements have seen CousteauX’s cinematic noir stylings favorably compared to Burt Bacharach, Scott Walker and Nick Cave.

McKahey and Moor were always the two principals in the band, and they are the sole remaining members of the earlier incarnation of Cousteau. Moor says of the decade-long split, “Ten years apart led us to appreciate the synergy we have. Sometimes musicians find a unique match in another. We’re one singer-songwriter in the bodies of two people. Because Cousteau were pre-aged and kind of timeless, the music still sounds today as it did yesterday. We’ve only become stranger and stronger now that we’re older.”

For their return to both stage and studio, McKahey and Moor have added an “X” to the end of their former name, which they ask listeners to consider “as a kiss ... and a scar.” The “X” is silent so the pronunciation of the band’s name remains the same.

Regarding the new album’s forays into jazz, Moor says “The torch song inhabits that sacred late-night place where jazz harmony and moving lyrics meet. I grew up hearing my father's Sarah Vaughan and Ella Fitzgerald records, and adored writers like Johnny Mercer who wove animist elements (rivers, moons, huckleberry) into stories of love lost and won. Liam is a big Sinatra and Weather Report fan, but Chet Baker is the guy for me. I bought a fluglehorn after hearing Chet's solo on ‘Shipbuilding’ by Elvis Costello. Chet Baker said he sung like he played the trumpet: these are all signposts towards the CousteauX aesthetic.”

“BURMA,” the first single from CousteauX, provides a captivating introduction to the new album. Opening with a plaintive trumpet, McKahey’s voice finds perfect accompaniment in the piano, upright bass, marimba and string arrangement. The song was inspired by the WWII acronym ‘B.U.R.M.A.,’ which stood for “Be Upstairs Ready My Angel,” a popular expression written by British soldiers on letters sent to lovers. The haunting video for “BURMA” was lensed by Chris Lewis-Smith.

It’s easy to imagine “Maybe You” and “Seasons of You” being interpreted by Dusty Springfield in decades past as both tracks have the same easy grace as displayed on the watershed Dusty In Memphis LP (1969). With Liam’s voice up close and vulnerable, “Seasons of You” is a strong contender for a future single, taking the form of a sublime three minutes of pop perfection.

CousteauX will be touring Europe in the fall with a U.S. tour planned for spring 2018.