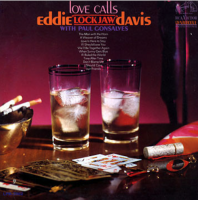 slideshow
I love the three albums that tenor saxophonist Eddie “Lockjaw" Davis recorded for RCA in the mid-1960s. They maximized his badness perfectly, surrounding him with enormously talented artists and arrangers and songs that were perfectly suited to his take-charge sound. The first was Lock the Fox (1966), the second was The Fox & the Hounds (1967) and the third was Love Calls (1968). The wild part is that all three were produced by Brad McCuen, a leading RCA producer from 1948 to 1969 who spent much of his career producing country music artists. As these Lockjaw albums show, the difference between a good album and a great one is always the producer.

I've posted on the first two RCA albums in the past. Both are must owns. The third is the subject of my focus today. The first stroke of McCuen's genius for Love Calls is that he brought together two of the greatest big-band tenor saxophone soloists of all time—Davis from Count Basie's band and Paul Gonsalves from Duke Ellington's orchestra. The second brilliant stroke was having them record ballads. The third was the accompanying rhythm section: Sir Roland Hanna (p) Everett Barksdale (g) Ben Tucker (b) and Grady Tate (d).

To make your listening life simple, Davis is the first soloist on Love Is Here to Stay, Just Good Friends and I Should Care. Gonsalves plays first on the other tenor saxophone solos. You'll get used to sound of their distinct horns.

Both were tenor titans but had very different ways of delivering the action. Davis was cunning and sly, with a brash blues attack that was edgy and thrilling, with roots in late 1940s jump blues. Gonsalves was smoother around the edges but no less gifted when it came to blues ideas blended with intimate soul and enormous stamina. If Davis was a chain saw, Gonsalves was a ratchet.

By having both tough tenors play ballads, McCuen shrewdly removed the showboat element from the session, forcing both gentlemen to show their seductive sides. Every song winds up sounded as if they were trying to win over the same woman with very different romantic pitches. Hanna is splendid on the album as is Grady Tate and the others. The ballad session lets your ear move around to different players so you can appreciate how special these guys were.

In this regard, the album sounds as if the two greats were taped in slow motion so you could hear every single note. If I were taking up the tenor saxophone, this is the album I would use to try and mirror two great tenor artists, so I could get the feel of how a ballad should sound. Three perfect albums, one producer. Quite a trick. And McCuen today is barely known north of Nashville.

A postscript: McCuen's first love was jazz when he joined RCA in the late 1940s. He produced RCA's Vintage series of re-issues in the 1970s (you know, the ones with vintage bottles of wine in a wine rack on the cover, including The Bebop Era). He also produced many of Gary Burton's albums for RCA, including Duster; Bill Dixon's Intents and Purposes, a long list of reissued Henry Mancini albums, Harold Vick's Straight Up and others.