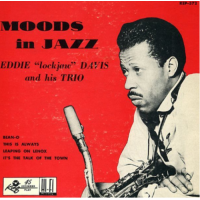 slideshow
Tenor saxophonist Eddie “Lockjaw" Davis was among the first jazz saxophonists who used an organ combo on tour and when recording. Like many horn players who started out in R&B bands along the Chitlin' Circuit in Black communities throughout the upper Midwest in the early 1950s, Davis realized that the Hammond B-3 organ was a moneymaker. Instead of hiring a costly big band, the organ could simulate the spectrum of reed and bass tones and provide excitement. The instrument not only filled the space neatly behind a saxophone but also engaged audiences accustomed to hearing it in church.

Davis's early organ-combo sessions were for the King label between 1949 and '57. He would, of course, feature the organ throughout his career, working extensively with Shirley Scott in the late 1950s and '60s. The King sides were recorded mostly for jukeboxes in bars and clubs that were switched on by managers during the afternoon or between live sets at night. Davis had great taste in players, seeking out those who matched his own brash saxophone attack. He had to feel the groove and looked for those who had a funky groove on the double-decker keyboards, could play riffs with a Basie sectional feel, and showed enormous confidence and dominance on the instrument.

Davis spent the next few years in Count Basie's newly formed New Testament band, recording in the studio and touring. By 1955, Davis was back leading organ groups. In the studio in '55, he used organist Doc Bagby. Here's Fireball, also known as Smooth Ride, with Charlie Rice on drums in April '55...

Here's Eddie's Function in February 1957, with the same group. It would be his last recording for King Records before moving on to Roulette...