SOURCE: JAZZWAX BY MARC MYERS
May 4, 2015
Sign in to view read count 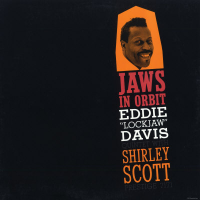 slideshow
For jazz to ignite on record, there needs to be three factors in place. First, you need the right combination of artists, which is harder than it may seem. We've all listened to albums that fall flat despite a stellar personnel. Second, you need the artists in the right frame of mind—meaning all in the same groove. And third, you need the right producer who is passionate about the session, selects the right mix of songs and inspires the musicians to create incredible music.

All of these forces came together on May 1, 1959, when the album Jaws in Orbit was recorded for Prestige. This session was led by tenor saxophonist Eddie “Lockjaw" Davis and featured an action faction: Steve Pulliam (tb), Shirley Scott (org), George Duvivier (b) and Arthur Edgehill (d). Right there, you have a winning quintet that can cook on standards and blues. On this particular day, they all came to burn. And the producer was Esmond Edwards, a highly underrated producer (and photographer) who had knack for lighting fires under sessions.

Pulliam also is little-known today. Throughout the 1950s, the firm, power trombonist played and recorded in pianist Buddy Johnson's R&B big band. Scott, of course, was a natural fit with Davis, operating as the bellows to Davis's coal furnace. And Duvivier and Edgehill were veteran cookers.

This is a flawless album, with some tracks more exceptional than the rest. Masterpieces include Davis originals Foxy, Bingo Domingo and Tadd Dameron's Our Delight, with Foxy rocking so hard it all but comes off the rails. This session was one of the last engineered by Rudy Van Gelder at the studio in his parents' house in Hackensack, N.J., before he moved to his home/studio in Englewood Cliffs, where he is today.

You'll find yourself turning up the volume on each track until the end, when it will be about as loud as you can take it. Some albums can still do that.

JazzWax tracks: For some reason, this one isn't available as a download. In fact, Concord would do jazz a great service by releasing a remastered Complete Eddie “Lockjaw" Davis on Prestige. For now, you'll find Jaws in Orbit here.