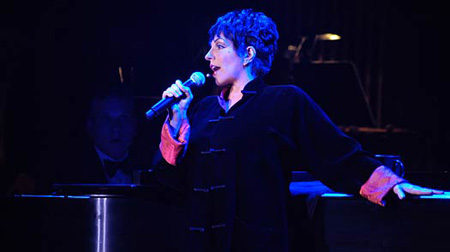 Liza Minnelli performs “Liza's at the Palace," at the historic vaudeville theater in New York City.

Liza is still somebody's idea of entertainment. Witness the frenzied scene a few nights ago at Broadway's Palace Theatre, where Liza is doing a one-woman show through Jaunary 4. For one thing, she looks a lot better on a theater stage than she does under the close scrutiny of TV cameras sleeker, steadier, slimmer. The spangly pantsuits flatter her. She sounded better too, at least when the hand mike was in its proper place and she wasn't being drowned out by the 12-piece orchestra, larger than that for many Broadway musicals.

But Liza could have sounded like Rosie with a head cold and the crowd would have gone wild. I don't think I've ever seen this kind of adulation pouring out of a theater audience. There were standing ovations after virtually every number. “We love you, Liza!" “You look great, Liza!" the fans yelled out whenever the room was in danger of quieting down. They cheered her costume changes, laughed knowingly at the coy references to her failed marriages, cooed nostalgically as she reminisced about her mom and her “godmother," Kay Thompson, whose 1940s nightclub act she pays tribute to in the second act. When she closed the show with “New York, New York," and followed up with an encore of her mother's sentimental holiday number, “Have Yourself a Merry Little Christmas," they died and went to heaven.

Even for the Liza-resistant, the show delivers. Her voice is stronger than the last time I saw her onstage in a 1999 tribute to her father, film director Vincente Minnelli and the song selection is a canny mix of crowd-pleasing old faves ("Maybe This Time") and slightly more adventurous fare. (Her over-the-top emotionality doesn't overwhelm the delicate “He's Funny That Way," but she pretty much obliterates the intricately ironic lyrics in Comden and Green's “If.") She shines in a medley paying tribute to the Palace Theatre's vaudeville past, and proves she hasn't lost much off her fastball in “Cabaret" only this time, the famously large-living star pronounces, “When I go, I'm not goin' like Elsie."

Indeed, a Liza Minnelli concert is never about musicality so much as it is about the psychodrama of watching showbiz's most famous high- wire act try to make it to curtain call without a visit from the EMS unit. Even the minimal choreography lots of arm-thrusts and quick- marches across the stage seems to wear her out. In between songs she gasps for air and grabs for her bottle of Gatorade as if she were an NFL cornerback returning to the bench after a 60-yard interception run. Halfway through the two-and-a-half-hour concert she pulls out a chair and plops down into it for a couple of numbers. We catch our breath along with her.

But hey, she's a trouper. The luxe, schmaltz-encrusted voice that seems constantly on the verge of either laughter or hysterical tears doesn't really seem to connect with the specific lyrics she's singing, but they're expressing something if only her fierce love of performing and need for affirmation. The concert is testament to the power of an indomitable star of diminishing powers who still has enough adrenalin, musical instincts and smart packaging to get up there and demand our love. Maybe she even deserves it.