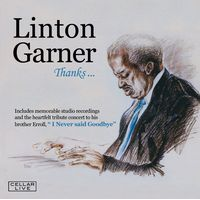 When pianist Erroll Garner was growing up in Pittsburgh, Pa., he was overshadowed by his older brother Linton. In 1944, Erroll moved to New York and began his trio and solo career. Linton, meanwhile, played with Fletcher Henderson in the 1940s, followed by Billy Eckstine, Earl Coleman, Babs Gonzales, Fats Navarro and others. He led his own trio from the 1950s to the '70s, touring often in Canada. In 1974, Linton Garner moved to Vancouver. Erroll died in 1977 and Linton died in 2003.

Several months ago, drummer Don Fraser, who played with Linton, alerted me to an album of concert appearances by Linton between 1993 and 2002 recorded by the Canadian Broadcasting Corp. The album, Thanks, features mostly originals by Linton in tribute to his brother Erroll.

As Don notes: “At the time of the concert, Linton’s health was not at it’s best. He liked Ron Johnston’s playing and wanted him to be part of the concert to play on selected tunes. The final track Lament For Mr. G. was written by saxophonist Stewart Loseby and was dedicated to Linton following the pianist's passing. It was recorded at Carltone Studio on Nov. 5th, 2004."

All the tunes on the album except for Laura and Lament for Mr. G. where written by Linton. Here are the tracks, when they were recorded and who is on piano...

The album is a touching and tender musical love letter from one brother to another.

I'm told that net proceeds from the sale of the album will go to support the Linton Garner Scholarship fund established in his name at Capilano University in North Vancouver, Canada.

JazzWax clip: Here's “Sometimes It's Hard to Convey," with Linton Garner on piano.