As one of America's leading music festivals, we are proud to feature a wide variety of emerging and established artists of all styles and genres under the auspices of ‘Jazz’ from around the globe. There is always something for everyone at XRIJF. —John Nugent, Producer and Artistic Director

Xerox Rochester International Jazz Festival (XRIJF) producers John Nugent and Marc Iacona today announced the complete lineup for the festival’s 17th Edition. The nine-day festival returns to Rochester June 22 to June 30 presenting more than 1500 artists from around the world in 300-plus shows at 20 venues.

The 2018 Festival is presented in three series — the Club Pass series with 214 shows, the headliner series of six shows and 94 free shows and events all held in Rochester’s East End Cultural and Entertainment District.

Producer and Artistic Director John Nugent, who founded the festival in 2002, received more than 3,000 artist submissions over the course of a month and almost as many suggestions from loyal festival patrons.

“As one of America's leading music festivals, we are proud to feature a wide variety of emerging and established artists of all styles and genres under the auspices of ‘Jazz’ from around the globe. There is always something for everyone at XRIJF.” 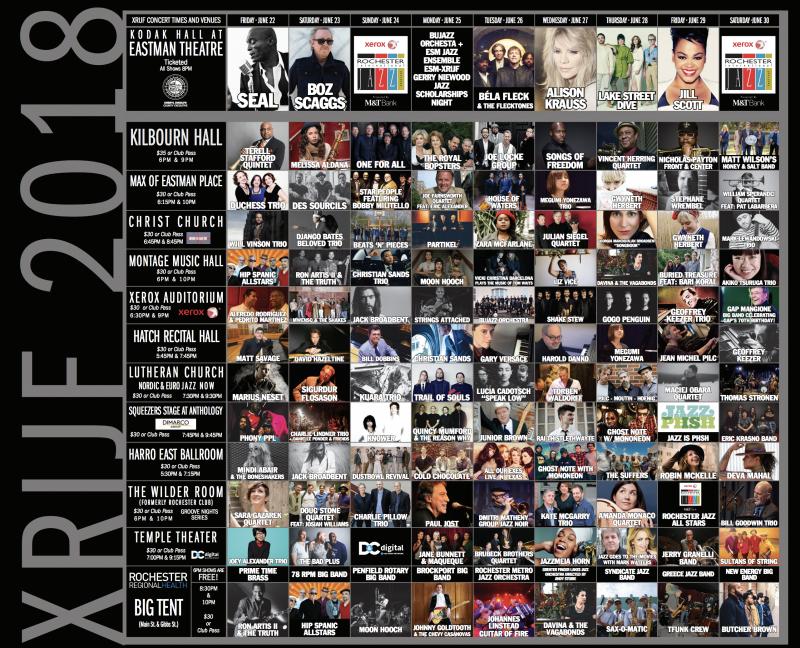 Nugent, whose motto is “it’s not who you know, it’s who you don’t know,” added, “Keep an eye out for these XRIJF fan favorites and my producer's picks: Joey Alexander Trio, Songs of Freedom, Robin McKelle, Moon Hooch, Dev Mahal (daughter of blues musician, Taj Mahal, Geoffrey Keezer Trio, Lakecia Benjamin, Matt Wilson’s Honey and Salt BandΩ, {VickiChristinaBarcelona Sings the Music of Tom Waits, Shake Stew, The Bad Plus, Sara Gazarek Quartet, Mwenso and The Shakes, Melissa Aldana, Gwyneth Herbert, GoGo Penguin, Ron Artis II and The Truth, All our Exes Live in Texas, Dustbowl Revival, Jazzmeia Horn, and One for All.”

Iacona, Festival Producer and Executive Director, said, “Jazz in June is just around the corner! John and I are privileged to be part of a musical experience that shines a light on our community. For 16 years we have been blessed to work with fantastic organizations that sponsor Club Pass series concerts, Jazz Workshops for youth, and free shows. We are also grateful to our entire team behind the scenes that helps us produce the Jazz Festival until the “last note” is played.”

Music is the Universal Language at XRIJF

Made in the UK, which started at XRIJF in 2008, showcases artists from the UK. In its 10th year, it remains the largest presentation of UK jazz outside the UK and has expanded to other major festivals in Canada and major U.S. cities.

Nordic and Euro Jazz Now, in its 11th year at the festival, will present artists from Finland, Denmark, Sweden, Faroe Islands and Iceland.

Tickets for headliner shows and Club Passes are available online exclusively at RochesterJazz.com or by calling (585) 454-2060. The Festival Ticket Shop will open in early June at the corner of East Avenue and Gibbs Street. Club Pass Series Shows: cash only $30 or $35 at the door, or enter with the Club Pass. No advance sales on individual shows. First-come, first-served for all patrons

XRIJF was founded in 2002 and is produced by John Nugent and Marc Iacona. The Festival has become one of the nation's most respected music festivals, navigating all genres of creative improvised music. This year’s nine-day festival, June 22 to June 30, will feature 1500 artists from 20 countries who will perform at 20 venues in more than 300 concerts including 94 free shows and events.