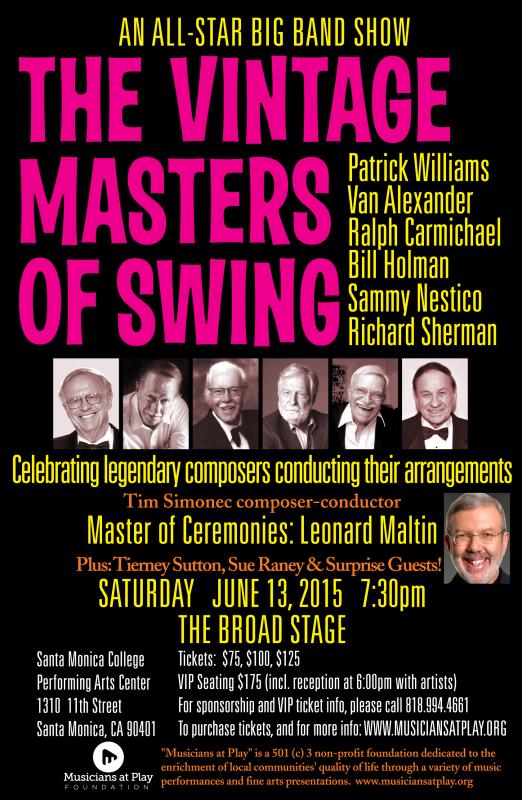 “The Vintage Masters of Swing” will headline The Broad Stage June 13th with composers—Alexander, Carmichael, Holman, Nestico, Sherman and Williams with Leonard Maltin as Master of Ceremonies

“This exciting concert will feature six of the greats—Patrick Williams, Ralph Carmichael, Bill Holman, Richard Sherman, Sammy Nestico and Van Alexander (celebrating his 100th birthday next month).” Brought together by composer-conductor Tim Simonec, the evening will also feature Tierney Sutton and Sue Raney on vocals. Simonec and Williams also announced that Leonard Maltin, one of the country’s most recognized and respected film critics and historians, will serve as Master of Ceremonies. They also promise a few surprise guest appearances.

“We believe live music offers a unique means of connecting us to our common humanity,” said Williams. This is the first event presented by “Musicians at Play” Foundation founded this year by Williams and a group of music professionals to present several music events each year throughout the city, to audiences of all ages performed by many of the world’s most talented and sought-after artists. With a focus on big bands, jazz, chamber music and live music-to-film events, “Musicians at Play” will be presenting concerts and educational outreach programs in order to expand cultural awareness and foster new generations of musicians and music lovers.

The Vintage Masters of Swing All Star Big Band Concert takes place at The Broad Stage on Saturday June 13, 2015 beginning at 7:30pm. A VIP reception with the artists and composers to benefit MAP Foundation will precede the concert starting at 6:00pm.