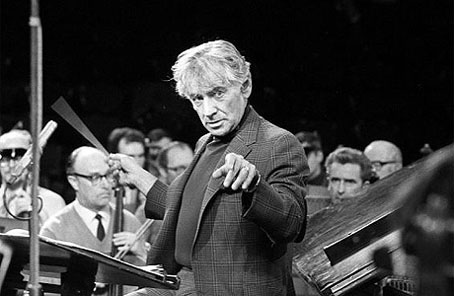 Since when was 'cosmopolitan' a dirty word? Leonard Bernstein proved that the low and high arts could make beautiful music together. I Feel Pretty: Bernstein's sex appeal didn't exactly hurt his pop-culture popularity.

It is one of those stories that never get old. Once upon a time, a matinee crowd bustled into Carnegie Hall to hear a program led by the visiting German-born conductor Bruno Walter. After taking their seats, the concertgoers learned that the maestro had fallen ill and would not appear. Even worse, it turned out that the only person available to lead the mighty New York Philharmonic on a half day's notice was a skinny assistant conductor who hadn't had time to rehearse the music (which boded ill), was born in America (unlikely in those days) and was just 25 years old (preposterous at any time). Under these fraught circumstances, the kid delivered a performance kinetic enough to be extraordinary. As in four-curtain-calls extraordinary. As in front-page-of-the-next-day's- New-York-Times extraordinary. As in (keep in mind the live radio feed beaming it from coast to coast) Bobby-Thomson-"the-Giants-win-the-pennant" extraordinary.

Leonard Bernstein captured the public imagination that day in 1943 and, in five succeeding decades as conductor, composer, teacher, activist and all- around personality, never let it go. This fall, what feels like half the cultural institutions in New York City have banded together to honor his far-flung achievements. Led by Carnegie Hall and the New York Philharmonic, “Bernstein: The Best of All Possible Worlds" marks the 90th anniversary of his birth and the 50th anniversary of his appointment as music director of the Philharmonic. There are symphonic concerts (some featuring student choirs drawn from public schools), jazz renditions of his work (by Bill Charlap), an in- depth film retrospective at Lincoln Center and even “Our Lenny," a two-week radio celebration that aired earlier this month and now streams on wnyc.org. This octopus-armed reach is only fitting for the man who was captured in a 1957 Time cover story staggering to bed at 3 a.m. and gazing in horror at the next day's schedule. “Who do I think I am," he cried, “everybody?"

Though it's a little awkward to be celebrating a 90th birthday instead of a proper centennial, the timing turns out to be propitious, too. Spend a little time chasing Bernstein's legacy around town, and you pick up overtones of a rare sensibility. Today, when high and low culture sneer at each other across a gulf of incomprehension and politically useful ill will, Bernstein seems a glorious freak: the avatar of a democratic cultural dream that elitism and populism can commune, not to cancel each other out but to their mutual benefit. This is not what Tocqueville had in mind when he predicted that the sprawling patchwork nature of our society doomed us to mediocre, middle-ground art. But not even the prophetic Tocqueville could see Lenny Bernstein coming.