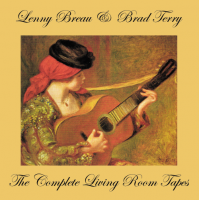 slideshow
Back in October 1978, guitarist Lenny Breau and clarinetist Brad Terry found themselves in the living room of Terry's mother's farmhouse in Maine. A tape recorder was there as well. Breau and Terry decided to record several songs. Both musicians were so proficient, the results sounded as if they had rehearsed in advance of the farmhouse session. In fact, they didn't.

Over a series of visits by Breau to the house, the pair completed 23 tracks in the living room and live locally. The tapes then sat on a shelf for years at Terry's place. As Terry wrote in the original liner notes, “From the first time we payed together, at the Augusta Jazz Society [in Maine], we felt a magic quality about our communication and a mutual respect for each other."

The recordings show Breau to be an extraordinarily accomplished accompanist. On these sessions, he ran bass lines on his guitar, played rhythm, soloed lushly, comped behind Terry and traded bars with him. In addition to playing together, there are several solo tracks. On the duo recordings, there's a Jimmy Giuffre 3 feel, minus the bass. Breau's attack had a Jim Hall ring while Terry played with a taste for Giuffre's edge.

On Breau's final visit to the farmhouse, Terry talked about getting the tapes commercially released. Breau told Terry that the tapes were his to release as he wished. Terry did so after Breau's tragic death. On August 12, 1984, Breau's body was found in a swimming pool at his apartment complex in Los Angeles. The coroner reported that Breau had been strangled. Though Breau's wife initially was suspected, she was acquitted and the case was never solved.

As Terry wrote in the liner notes, “All of these tracks were recorded live and are here 'as is.' There were no rehearsals or second chances. The flaws have not been covered up with electronics. I feel that the energy and just plain fun involved in our playing more than compensates."

What makes this album especially beautiful is the relaxed and conversational quality of the playing. Terry and Breau clearly are deep in dialogue on each track, spinning melodies into textured, dimensional works. To my ears, the album is among Breau's finest, and I'm sure Terry feels the same about his own playing. Gorgeous and meaningful all around.