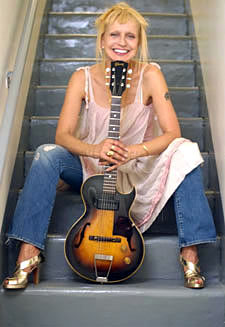 Stripped Down Trio Album Showcases Guitar, N'goni Ba, Camela N'goni, Calabash and Tama—Stern Thrilled with Result: “I Don't Know Why I Waited So Long to Record Like This"

Acclaimed Global Music artist Leni Stern delivers her most uplifting and optimistic album in years with the September release of 'Sabani.' The stripped down African trio album was recorded and mixed at Salif Keita's Mouffou Studios in Bamako, Mali, and its austere beauty, at times, evokes such powerful U2 ballads such as “One" and “Red Hill Mining Town."

'Sabani' means 'three' in Bambara, and all of the tracks on the album are trio compositions - a stark departure from the multi-instrumental African/Indian/Global orchestrations Stern has delivered as her sound evolved on recent albums 'Sa Belle Belle Ba,' 'Africa,' 'Spirit in the Water,' 'Alu Maye' and others. Perhaps it's the simplicity of the arrangements that has allowed Stern to find such a mystical quality to the music. Stern is thrilled with the result: “I don't know why I waited so long to record like this."

“like a thief" was inspired by the flamenco singer diego el cigalla and his record “corren tiempos de alegria." when i was a little kid and wouldn't behave my grandmother used to tell me that i had fallen off the back of a horse when the gypsies came through town. she had taken me in out of the goodness of her heart, but if i didn't start behaving myself, she would give me back to them. i don't know if it's true that my great grandmother ran off with a chimney sweeper, a gypsy, and that i have a little gypsy in me, but i have always loved their music.

“the cat stole the moon"—that's what little kids in mali shout on new moon nights.and you have to give them candy or coins for letting you know.

“an saba" means the three of us or just us three. that's what haruna said when i told him of my idea to make a trio cd. we have spent so much time just playing like this. it's effortless for us and full of memories. of places we have been together, of adventures we've had. i don't why i waited so long to record like this.

“djanfa" means betrayed. this song features zoumana tareta, the great malien soukou player and singer. he's been around longer than the rest of us, so it is his job to share some of his wisdom when we are together. those are the times when i feel most privileged to be part of an african community. i remember the time he told abou, our engineer that he was too skinny and he had to eat more. he talked about the time when he didn't have anything to eat for days. how he made it through those hard times. we all sat and listened like children when he got going that way. in this song he sings about all of us, haruna, prince, abou and me. it's a real special honor.

“papillon"—when my friend adam's wife got sick, they talked about what they would like to be, if it was true that there is reincarnation and we all have more than one life to live.she said she would like to be a butterfly. i met adam in a little cafe on the lower east side, to see how he was doing and i swear when we stepped outside i almost collided with a few butterflies that came towards us and started flying around adam. it happens a lot he says.