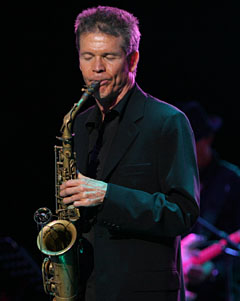 slideshow
New York, NY (USA) Well, it's still awards season and the Canadian Smooth Jazz Awards is coming up later this month on Friday, April 23 at the Living Arts Centre in Mississauga, Ontario. The Canadian Smooth Jazz Awards is an annual awards event that is one of the hottest tickets in Canada. 2010 marks its sixth year in production. This year's recipient of the awards show's top honor, the George Benson Lifetime Achieve Award will be presented to legendary jazz icon David Sanborn. The official announcement was made in a press release in late 2009. Mary Kirk of Wave 94.7FM in Toronto/Hamilton and co-chair of The Canadian Smooth Jazz Awards says, “We are truly honoured to be able to celebrate David's outstanding career by presenting him with this year's Benson Award. Like those recipients before him, he has been such a tremendous ambassador for Jazz, pioneering the Pop/Jazz crossover and seducing millions of fans over the last few decades with his artistry."

15-time Grammy Award winning producer Phil Ramone will present the George Benson Lifetime Achievement Award to David Sanborn. Sanborn's latest release “Only Everything", which hit stores in January, was produced by long-time collaborator, Phil Ramone so it's a celebration all around. Sanborn's current release tallies a grand, 24 albums spanning a well over thirty year career for the sax impresario. Guest performers include Rick Braun, Darren Rahn, Peter White, Paul Brown and Jessy J to name a few. Nominations in the international categories include:


International Vocalist of the Year


International Group/Duo of the Year

There has been a rare excitement in the air from the United States and Canada alike since the news broke about Mr. David Sanborn being this year's major honoree at the 6th Annual Canadian Smooth Jazz Awards. SmoothJazzNow.com reports that there has been astounding record numbers in ballot voting for this year's event quoting “It's a love-fest..." The tributes are pouring in for David Sanborn, this year's recipient of the George Benson Lifetime Achievement Award. Benson, who won the first honor and has since had the award named after him, was the first to tip his hat to Sanborn, “We both have tremendous identities in the world of Smooth Jazz. It would be hard to find anyone amongst serious music listeners who does not recognize the name David Sanborn and the great music he plays. So, I am not surprised that he is being honored as this year's recipient of the George Benson Lifetime Achievement Award." says Benson.

Sax Star Alfonzo Blackwell has paid tribute to many jazz legends that came before him on most of his recordings. He had the honor to share his thoughts on past Lifetime Achievement Award recipients and legendary guitarists, George Benson and Earl Klugh. He was especially honored to speak about this year's honoree and fellow saxophonist, David Sanborn. A brief excerpt from his quote is as follows, “It gives me great pleasure that the Canadian Smooth Jazz Awards is bestowing the George Benson Lifetime Achievement Award to Mr. Sanborn. The man, his sax, his music and his legacy is cemented in the annex of American music history. Done in Frank Sinatra style, David Sanborn did it his way...and in my book, that's the only way to do it! Congratulations and much love and respect." stated Blackwell. The full quote by Alfonzo Blackwell is featured on the Smooth Jazz Now tribute pages to David Sanborn on the SmoothJazzNow.com website.

Well, David Sanborn and Alfonzo Blackwell have a lot in common; they both play a mean saxophone. Simply put, few saxophonists have the ability to blow with the kind of soul, power, heart, dexterity and intensity that both Sanborn and Blackwell play with. Also, they both overcame chronic childhood ailments that affected their lungs, through playing the saxophone. Sanborn suffered with polio and Blackwell suffered with asthma. Their doctor's recommended playing a wind instrument to help strengthen and build up their lungs. As they say, the rest is history. Little did both of their parents expected that their therapy would result in being among the top saxophone players in music history for their raw approach and elite proficiency of their craft. “Only Everything" by David Sanborn is now available for purchase; is a sequel to his 2008 release, “Here and Gone" his critically acclaimed tribute to the late great Ray Charles and his band's musicianship which included one of Sanborn's chief saxophone influences, Hank Crawford. “Quintet: Portrait of Alfonzo Blackwell" is due out later this year. 2010 marks Blackwell's 15th anniversary in the music business and his forthcoming album is his first concept project that celebrates his musical passions. All tracks are written, performed and produced by Alfonzo Blackwell and features Blackwell live on all five instruments (saxophones, piano/keyboards, bass, guitar and drums). Blackwell will also pay tribute to jazz great John Coltrane and the King of Pop Michael Jackson on the highly anticipated album of his career thus far.

Other noteworthy quotes on David Sanborn are from Smooth Jazz stars Boney James, Dave Koz and Jessy J. Boney remarked, “David's music was a tremendous influence on my playing and he's always been a great inspiration in my pursuit of a career as a saxophonist. I'm grateful to know him." Koz says, “I can honestly say that I wouldn't be doing what I'm doing if it weren't for David Sanborn. He was and continues to be, one of the major forces of inspiration for me..." Newcomer Jessy J expressed, “David Sanborn has been a great inspiration to me. The way that he plays his horn- its like the last note he will ever play. I desire to commit to music with his same passion and grace..."

In addition, Co-chair, John Beaudin of Smooth Jazz Now.com says, “It's truly a dream come true for me personally to honour David Sanborn this way."