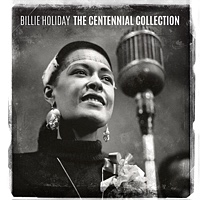 Born Eleanora Fagan on April 7, 1915, in Philadelphia, Pennsylvania Billie Holiday transformed American pop, jazz and blues music in the 20th century with a highly personal and distinctive vocal style that communicated beyond the truth of her material into the emotional content of every moment she was singing.

One of the premier interpretative singers in the history of recorded sound, Billie Holiday continues to affect the way we hear and feel the human soul in music. An archetypal jazz artist and improviser, Billie Holiday created a profoundly influential body of work that began with her first singles in the early 1930s and continues to move and inspire listeners more than fifty years after her tragic death, at age 44, on July 17, 1959.

The recordings on Billie Holiday: The Centennial Collection represent some of the finest performances recorded by Billie Holiday during the height of her career, from 1935-1945, and showcase the range of her artistry through some of her most successful, and most beloved singles. Recorded and released before Columbia Records introduced the first LP album in 1948, the tracks on The Centennial Collection include several signature songs Billie originally cut (as 78rpm singles) for the Brunswick, Vocalion, OKeh, Commodore and Decca labels during her creative peak.

Discovered singing in a Harlem jazz club in 1933 by mythic A&R man John Hammond, Billie Holiday sang at her first recording session on November 27, 1933, laying down tracks with jazz legends Jack Teagarden, Gene Krupa and Benny Goodman. In 1935, she'd go back into the studio with Goodman, along with Ben Webster and Cozy Cole, under the band leadership of Teddy Wilson. Several of her recordings with Wilson appear on Billie Holiday: The Centennial Collection, which features definitive recordings of “Billie's Blues," “God Bless the Child," “Strange Fruit," “Gloomy Sunday," “You Go To My Head," “Fine and Mellow" and other Billie Holiday essentials.

“I don't think I'm singing," Billie Holiday once said of her delivery. “I feel like I'm playing a horn.... What comes out is what I feel."

Billie Holiday: The Centennial Collection is the perfect introduction to an artist whose music is truly timeless.