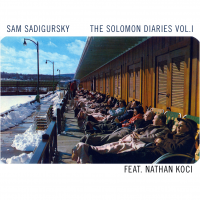 slideshow
Between international tours with the critically-acclaimed Philip Glass Ensemble, the award-winning composer/clarinetist Sam Sadigursky today announced the upcoming release of his latest recording project The Solomon Diaries. A sophisticated collection of true era-defining cross-genre composition, this trio of compelling albums showcases Sam’s wide-ranging eclecticism that references jazz, world music, and post-minimalism. Inspired by the dramatic rise and fall of the famous Borscht Belt region, The Solomon Diaries is an aural reflection on America’s Jewish Vacationland celebrating the monumental place that it has in American cultural history and capturing absence, loss, and change within the Jewish American immigrant story.

Searching for a new direction in his music, Sam became fascinated by the photo book The Borscht Belt by Marisa Scheinfeld, which shows the contemporary remains of the Catskills region just before many of the resort sites were completely demolished. He felt compelled to set these images to music, which led to a deep fascination with the region’s history. “The Solomon Diaries. is a musical documentation of a pivotal era in American Jewish history, one that tells a much bigger story than just a bunch of hotels and resorts in the mountains. I don’t have a direct personal connection with those places, but a story of refugees facing exclusion and rebelling by creating their own oasis and then eventually assimilating is a story that is so relevant today,” says Sam. “I dedicate this music to the memory of my grandparents, all of whom lived through the Holocaust and spent their lives driven away from their homelands of Eastern Europe.”

Growing up listening to Jewish music (his father is a Klezmer clarinetist/accordionist) coupled with his experience performing Jewish, Arabic and Middle-Eastern inspired music onstage in the 10-time TONY Award-winning musical The Band’s Visit, now more than ever, Sam’s musical aesthetic is peppered with a traditional folk flavor. “I think this is the most personal music I’ve written. My connection to Judaism is shaped most by its rich music tradition, which goes so much deeper than Klezmer music. There’s a space in these pieces for improvisation that reflects all the aspects of my musical background.”

Most of the albums’ songs were written in 2019 and early 2020 and originally performed with a quartet, but The Solomon Diaries. was slimmed down to a duo due to COVID-related limitations. Sam is joined by his former colleague, accordionist and multi-instrumentalist Nathan Koci, who prior to the pandemic served as music director and conductor of the TONY Award-winning Broadway revival of Oklahoma!. According to Sam, Nathan’s unique musical background made him the obvious choice for this music. “As difficult as it was having both our performing careers decimated by COVID, it was an enormous gift to have the time and the space to dissect and collaborate on this music in a much deeper way than our busy pre-pandemic lives might have allowed us.”

Described as “personal, not particularly restricted by ideas of musical genre, quite complex and resolutely unshowy (The New York Times), Sam’s “gracefully high-minded” compositional style is on full display. The trio of recordings comprises 28 tracks, many of which use found audio to augment the duo, including field recordings such as Jewish chants from Daghestan and Azerbaijan in Kudmant Chant, and archival recordings of entertainers from the Borscht Belt region. Recordings of Yiddish folklorist/singer Ruth Robin are featured in Pines Hora and Nevele and one of the most famous Yiddish melodies, Oyfn Pripetchik, gets a modern expansion on solo clarinet in What You Learn Here. Wiltz Waltz, a humorous tribute to Wilt Chamberlain’s stint as a bellhop at Kutscher’s, uses ambient café noise to envelop the duo and lift the energy of the piece.

Guest vocalist Katrina Lenk, best known for her role as Dina in the musical The Band’s Visit, for which she won the 2018 TONY Award for Best Actress in a Musical, speaks text from Ruben Wallenrod’s Dusk in the Catskills on the first album’s closer “Little Narrow Circles," which slowly builds from an understated melody to a raucous, drunken celebration. Bookending the series is Fannie’s Waltz, a short tribute to Fannie Shaffer, a Russian immigrant who survived the tragic fire at Triangle Shirtwaist Factory. “This is one of the songs that I wrote amidst the pandemic,” explains Sam. “The repetition of the opening idea of the melody here evokes the sameness of so many of our days that year. The clarinet lays out here – the accordion sings above an old sounding and dreadfully out of tune piano.”

The Solomon Diaries marks Sam’s seventh album. The Words Project (New Amsterdam Records), a series of four albums of original music based on poetry and text, received rave reviews. Noted music critic Steve Smith called it “compelling and touchingly intimate… that rare anomaly: a jazz-and-poetry record that sounds utterly natural and convincing” and went on to name it as one of Time Out New York’s top 10 albums of 2007.

Sam Sadigursky continues to make a mark as both a leader and sideman across a broad spectrum of musical landscapes. Sam has toured and recorded as a saxophonist and clarinetist with artists as diverse as Brad Mehldau, Fred Hersch, Lucia Pulido, Gabriel Kahane, Tom Jones, Edmar Castaneda, Katrina Lenk, Linda Oh, the Michael Leonhart Orchestra, Taylor Eigsti, The Mingus Orchestra, Rufus Reid, The Jamie Baum Septet+, David Yazbek, La Cumbiamba eNeYe, and the Philip Glass Ensemble, and is featured prominently on three Grammy-nominated albums with Darcy James Argue’s Secret Society. As a leader, he is currently performing with his group The Solomon Diaries, which recently performed at the Sheen Center in NYC and was featured on the Metropolitan Museum’s weekly Balcony Bar series.

As a composer, he has written for film and modern dance and has also published four books of original etudes for clarinet and saxophone. He is the recipient of numerous grants from organizations such as Chamber Music America, ASCAP, and Jerome Foundation. He appears on over 50 albums as a sideman, and was recently the onstage clarinetist for the Grammy, Tony and Emmy winning show The Band’s Visit on Broadway.

Nathan Koci is a performer, conductor and composer across multiple media including folk music, contemporary classical music, dance, and experimental theater. He most recently served as the Music Director and Vocal Arranger for the Tony Award-winning Broadway revival of Oklahoma!, directed by Daniel Fish. As a music director, he has also worked with directors and artists Rachel Chavkin, Jim Findlay, Daniel Kluger, Anais Mitchell, Molly Smith and Alice Reagan. As a performer, he has premiered new works by Timo Andres, Anthony Braxton, Ted Hearne, John Heginbotham, Maira Kalman, William Kentridge, Guy Klucevsek, and Stew and Heidi, working with ensembles including Alarm Will Sound, The Knights, Ensemble Modern, Bang on a Can, the Tri-Centric Orchestra, the Michael Leonhart Orchestra, and Wordless Music. He performs and records on horns, accordions, pianos, and banjos with groups including The Hands Free, The Opposite of a Train, and Shovels and Rope and currently teaches improvisation and arts engagement at The New School College of Performing Arts.