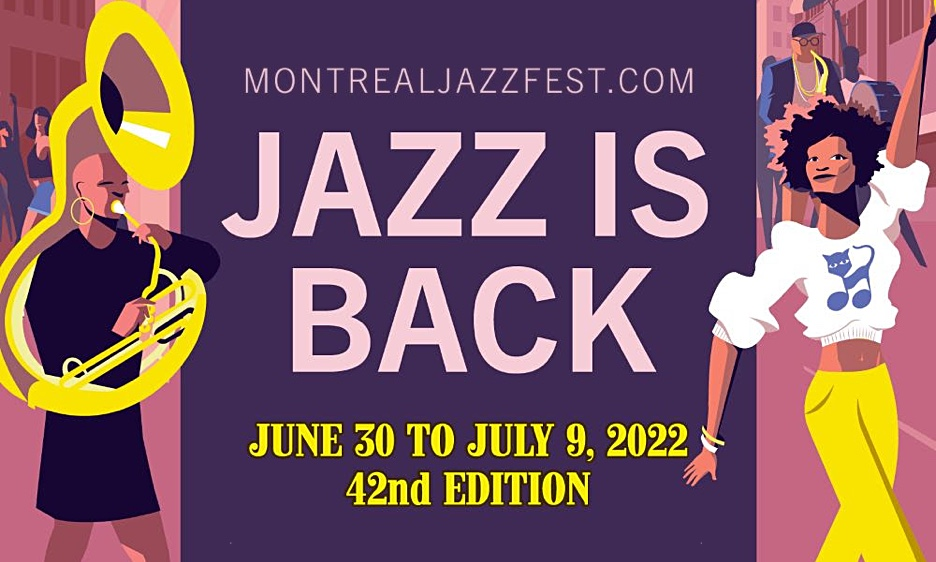 TD Bank Group is once again proud to present the Festival International de Jazz de Montréal for the twelfth consecutive year. Music has this extraordinary ability to bring us together, draw us closer and touch our hearts. After two difficult years, we are thrilled to help reunite jazz artists and their fans and create memorable moments in the city’s downtown together.
—Sylvie Demers, Chair, Québec Market TD Bank Group

The Festival International de Jazz de Montréal, presented by TD Bank Group in collaboration with Rio Tinto is taking downtown by storm once again this summer. From June 30 to July 9, 2022, the public can soak up that thrilling festival vibe for 10 fun and festive days. In addition to the stellar program announced earlier, the festival is proud to present brand-new initiatives that will be making downtown Montréal shine, not to mention treating music lovers to a feast for the senses.

We’re celebrating some new additions to Montréal’s ebullient cultural scene! The Festival is proud to unveil the Club Montréal TD, a new space that puts our metropolis, and what makes it such a vibrant city, at the heart of the experience. Located on the Esplanade of Place des Arts, in a relaxed, colourful and urban ambiance, the Club will present free shows by today’s hottest artists, or two to three concerts a night. It will also serve food lovingly prepared by a restaurant owner firmly rooted in Montréal’s culinary culture (stay tuned to find out their identity!) and a 100% local drink.

Inspired by contemporary artists like Frank Ocean and Daniel Caesar, Brazilian-Canadian Fernie will be playing his lush and soulful R&B sounds at Club Montréal TD. Member of the collective Kids From the Underground, he dazzled the Montréal music scene this past August with the release of his album Aurora.

Get set to watch singer and rapper Emma Beko heat up the Club stage! The other half of the electro-pop duo Heartstreets just released her second album Digital Damage unanimous acclaim.

The unmissable Suuns will be performing on the Club Montréal TD stage. The Montréal cult band released The Witness last fall, which Pitchfork hailed as their most cohesive. The album is a departure from their somewhat mysterious and claustrophobic krautrock the past, making room for more spontaneity and improvisation, two touchstones of the group’s performances.

Though now based in Los Angeles, Yonatan Ayal (alias xSDTRK) and Pierre-Luc Rioux have not forgotten their Québec roots. Individually, they have worked with Lady Gaga, Jennifer Lopez, Skrillex and even Céline Dion. Together, they make up Chiiild, the soul and psychedelic duo that will play the final show at Club Montréal TD.

Les Envolées du Festival June 30, July 2, 3, 8 and 9, 1 p.m. Free! While many seasoned performers will be gracing the Club Montréal TD stage, keep your eyes peeled for headliners that include five projects from five different Québec universities.

Le Studio TD, formerly L'Astral, throws its doors open, inviting you to enjoy two concert series each night from 6 p.m. to 10 p.m. The Entrée Libre TD series will feature jazz’s biggest stars. As the name says, entry is free and is on a first come, first served basis. It’s an awesome opportunity to make new discoveries!

Festivalgoers will get an inside peek at the contagious creativity at work between pianist Marianne Trudel and drummer John Hollenbeck. Together, they created the Dédé Java Espiritu project, or what they see as an ode to beauty, intuition and spontaneity.

Here’s your chance to see celebrated guitarist Julian Lage playing in a trio with bassist Scott Colley and drummer Dave King. The two musicians will accompany Lage as he plays his new album Squint, his first with the prestigious Blue Note label.

Composer, producer and multi-instrumentalist Louis Cole will be in Montréal with his Big Band. The group, whose fans number Flying Lotus, Quincy Jones and the Red Hot Chili Peppers, promise an electrifying evening of hot jazz with electrofunk influences that will have you on your feet and dancing.

There has been a genuine resurgence in British jazz over the past few years thanks, in no small part, to Kamaal Williams. Whether on the excellent Black Focus released in 2016 with Yussef Kamaal or his solo project, the Taiwanese Londoner loves mixing worlds, styles and cultures to create a hybrid jazz driven by strong rhythms.

Icelandic jazz singer Laufey has already been conquering the hearts of Gen Z, one viral video at time. Approved by Billie Eilish and Willow Smith, Laufey will be playing songs from her EP Typical of Me, released last year, as well as new songs “Valentine" and “Everything I Know About Love."

This brand-new installation on Sainte-Catherine Street is exciting, colourful, interactive and inclusive and invites people of all ages to unleash their fun and creativity! With a theme of “our bodies: music makers”, the different activities proposed let people tap into the relationship between body movement and music.

“Rio Tinto has been teaming up with the Festival International de Jazz de Montréal since 2006 and we are happy to announce that we’ve renewed our partnership for the next three years. No other cultural event better captures Montrealers’ joie de vivre than the Jazz. We are thrilled that it is returning in all its glory, with an impressive line-up of artists from here and afar, adoring crowds of music lovers and activities for the young and the young at heart.."- Ivan Vella, Chief Executive, Rio Tinto Aluminium

NEW FACES ON THE OUTDOOR STAGES

After two sold-out concerts at MTELUS, Clay and Friends, one of the hottest groups in Québec, will have festivalgoers grooving to their new EP AGUÀ, released last fall.

Montréal’s legendary Bran Van 3000 will be lighting up Place des Festivals a quarter century after their smash album Glee conquered the world. James Di Salvio and his group will be playing the retrospective concert Celebrating the 25th Anniversary: “The Deer and The Bunny”.

Canadian world trumpet sensation Ingrid Jensen will be playing with the Orchestre National de Jazz de Montréal. She’ll be joining her talented sister, conductor and saxophonist Christine Jensen to present Equal = Orchestra. The project brings together works by Tara Davidson, Marianne Trudel and Christine Jensen that highlights the concepts of equity and inclusion.

Ontario folk group The Weather Station will be stopping off in Montréal. The group had a spectacular 2021, not to mention its album Ignorance being short-listed for the prestigious Polaris Music Prize. Released this past March, their sixth album How Is It That I Should Look at the Stars has conquered critics’ hearts.

Not only does Pub La Traversée Molson Export on esplanade Tranquille offers jazz music programming, but it’s also the perfect spot to kick back and enjoy a snack.

Thanks to a partnership with Rogers that started in 2021 and was finalized this year, the legendary Blues Festival stage is back, and we couldn’t be happier!

“Rogers is thrilled to partner with a cultural event that Quebecers have been waiting impatiently to return to its original format. We are proud to be able to ‘jazz up’ our city for Montrealers and visitors who will be moving to the beat of the performers for 10 full festival days."- Édith Cloutier, Regional President, Rogers Québec

On the outdoor site, Alexandre Courteau will be mixing live on site on June 30 and July 1 from 6 p.m. to 7 p.m., wowing audiences with two DJ sets on the Club Montréal TD stage.

Plus, every day between noon and 11 p.m., music and dance fans will have the chance to unveil their talent during the ICI MUSIQUE karaoke.

A QUICK PEEK AT THE SITE

Have a look at the site plan and your favourite stages, plus check out other must-sees to add to your itinerary.

The public will have a blast watching major local and international names on the main stage of the Place des Festivals, including Clay & Friends, The Roots, Tash Sultana, Kamasi Washington and more!

Located at the corner of Sainte-Catherine Street and Jeanne-Mance Street, the stage will be host to diverse musical influences, including nu soul, R&B, jazz, fusion and folk.

The unique programming at the corner of De Maisonneuve Boulevard and Du Président-Kennedy Avenue brings together artists from all over the world.

A must-have for festivalgoers. Download the festival’s mobile app, powered by Rogers, to get instant access to the indoor and outdoor programming, an interactive card and indispensable links for ticket purchases and more.

A JAZZ PACKAGE FOR VISITORS

Enjoy unlimited access to the 3 hottest festival venues during your stay, and entry to nearly 10 concerts! Stay at the DoubleTree, the official festival hotel, or the Monville—breakfast, shows and coupons for the site included. Limited quantity.

We would like to thank the Festival's presenting partner, TD Bank Group and the co-presenter, Rio Tinto for their renewed support. Thank you also to Rogers, Loto- Québec, the Société des Alcools du Québec and Molson Export.

Moreover, the Festival would like to acknowledge the continuous support from: the Government of Canada — Canadian Heritage, Canada Economic Development, the Fondation Musicaction, the Government of Québec — the Ministère du Tourisme, the Secrétariat à la région métropolitaine and the SODEC, as well as the City of Montréal, Tourisme Montréal and Montréal Centre-Ville.