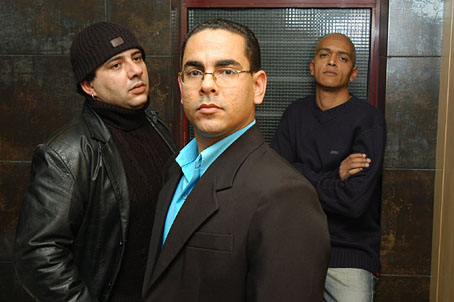 slideshow
The further an artist moves forward in their chosen musical direction, the more they define their artistic identity. It's a process that evolves over the course of years, as the musician moves through a series of milestones. These milestones are the moments that we remember historically, but it's really the events that lead to the milestones that build the artist's identity. All the hard practice and long performances that the musician experiences, as well as the different people and places that they encounter, push them towards each milestone. The culmination of these experiences lead the musician to new heights and helps them shape their overarching ideas about music.

As pianist Samuel Quinto has progressed in his pursuit of Latin Jazz, he has become an artist with a strong musical vision. Raised in Salvador da Bahia, Brazil, Quinto embraced music, driven by the inspiration of his community. The church exposed Quinto to gospel music and started him playing the piano while the language of the streets spoke to him about traditional Brazilian music. He gave school a chance, but music soon trumped engineering and the piano became a full time job. While performing at a local hotel, some guests introduced Quinto to the music of Michel Camilo. Latin Jazz became Quinto's prime passion, but he soon realized that Bahia held little promise to advance this artistic interest. The pianist looked towards Europe, and after a preliminary trip and some research, he ended up in Portugal. The country didn't have an active Latin Jazz scene, but it did have a wealth of strong musicians who recognized Quinto's strengths. He soon had a regular trio who found their way into the studio to record Quinto's first release as a leader, Latin Jazz Thrill. The recording opened possibilities for performances across Europe, spreading Quinto's reputation. By 2009, the membership in Quinto's trio had rotated, bringing drummer Manuel Santiesteban and bassist Marcos Borges into the mix. The three musicians recorded Quinto's second release, Salsa 'n Jazz, a strong album that focused upon the pianist's original compositions. With this strong and defined statement completed, Quinto presented a solid view of his artistry.

The course of Quinto's career represented a true progression, rising from the initial inspirations of gospel music and Brazilian traditions into a fully formed Latin Jazz artist. The compositions presented on Salsa 'n Jazzreveal a creative mind with the technical abilities to express his ideas with precision and flair. In Part One of our interview with Quinto, we looked at the early influence of his church and Brazilian music, his move into a professional career, and his discovery of Michel Camilo. Part Two of our interview focused upon Quinto's move to Portugal, the Latin Jazz scene in that part of Europe, and the formation of his trio. We complete our conversation with Quinto today, talking about his current release Salsa 'n Jazz, the member of his trio, and his future plans.

———- LATIN JAZZ CORNER: Salsa 'n Jazzcame out in 2009; how was that recording different?

SAMUEL QUINTO: The difference is that I showed my compositions. On the first album, I only recorded three compositions of my own. I made arrangements of other standards. I played “Summertime" as a guajira. Night and Day was a combination of baião and salsa, I made a new rhythm, salsa-baião. On Salsa 'n Jazz, I recorded just my compositions, except for “Stella By Starlight." It was an opportunity for me to show my original music; it was a dream come true.

LJC: Had you been composing for a long time, or was this something new for this album?

SQ: I had composed many pieces of music earlier. I composed a lot of gospel music for choir, quartets, trios, and full groups. I had also composed instrumental music, like samba, bossa nova, and guaracha. I have many compositions. I chose these eight piece for Salsa n' Jazz.

Once of them, “Ficou No Meio," I composed it on the elevator! The trio had come to practice; we took the elevator and the elevator broke between the third and fourth floors. We were in this position for one hour! So I made this music during our time on the elevator.

There was also another song, “Kalimba Mulêle." When I was in Brazil last year, I bought a kalimba. It was a little kalimba, like a toy; it wasn't a professional kalimba. The kalimba has five notes and the five notes are sharp notes. I decided to make a piece of music for this kalimba, so I composed “Kalimba Mulêle."

LJC: Once thing that I was curious about in your compositions—it seems like you use rhythms from both Brazil and Cuba equally. Do you feel a stronger connection to the Brazilian rhythms or is it all something that you draw upon?

SQ: I feel that Cuban music and Brazilian music, not just the two countries, Cuba and Brazil, but also the Dominican Republic, Mexico, and Argentina. I feel like it's all one music. I feel that if I could put one rhythm inside another one; that is why my music is not so pure. I don't have pure rhythms on this CD. There is just one rhythm that is pure&#151chorinho—that's on “Vôo Da Andorinha." It's a pure chorinho like we play in Brazil in the bars or in the streets. We play chorinho like this. But the other compositions are mixed. I feel like these rhythms are related and I put one inside the other one.

LJC: Could you tell me a little bit about the other members of your trio?

SQ: Right now, I have playing with me, Manuel Santiesteban, a Cuban drummer that has lived here for the past thirteen years. He's an amazing drummer. You've got to see him live. When we played at the jazz festival in Matosinhos, we opened for Dianne Reeves. She had a Brazilian guitarist with her at that concert, Romero Lumbamo. He talked with us; after he saw Manuel play, he said, “Man, you're like an octopus! How do you play like that?" He's a very good musician and very good friend. He studied in Cuba and graduated with a degree in drums. He went to the same school as Dafnis Prieto, who plays with Michel Camilo. He plays both percussion and drums.

Edamir Costa is now playing bass with me. Marcos Borges played on Salsa 'n Jazz, but he is no longer with me. He was getting busy with another job, and so he asked me to find someone else. So I asked Edamir Costa, who played on my first CD, to come back with me again. He is from Rio de Janeiro; he studied bass there with Andr Santos, a maestro who plays in traditional orchestras that focus on music from Brazil. Edamir has lived here eleven or twelve years. He plays with many, many musicians. He never played Latin Jazz before he played with me; he only played Brazilian music or pop and rock. When I met him, I invited him to play Latin Jazz. He told me, “I don't know how to play this—your music is crazy!" I told him, “Come to my house. We'll practice together and I'll show you the bass lines and accents." We practiced everyday and he started to learn how to play with me. Right now, he's a great bassist.

LJC: What does the future hold for you and your group?

SQ: I'm trying to record a solo album. I know that is it is tough to record a solo Latin Jazz album, but I'm going to try. I have some compositions that I've arranged for solo piano and I think that it's a great project. I will play guitar also; on one piece I play both piano and guitar—it's a great samba on the guitar.

In addition to the solo piano album, I am planning on doing a CD with a great singer that lives here in Portugal, Marcos Buzana. He's a mixture between Milton Nascimiento and Djavan. We would like to record a CD together. He plays guitar and sings while I play piano—the album could be very good.