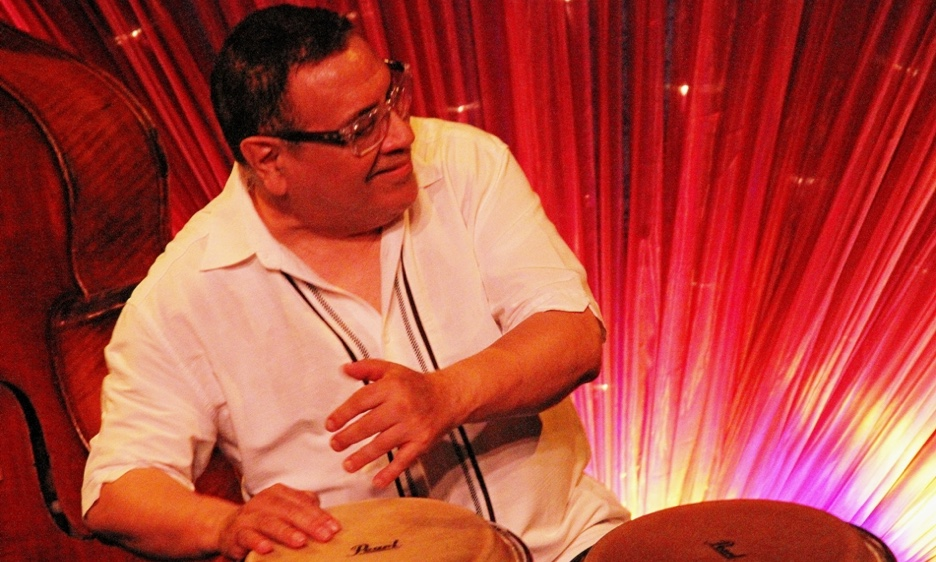 SOURCE: KEN FRANCKLING'S JAZZ NOTES
November 24, 2021
Sign in to view read count
Conguero Sammy Figueroa brought a quintet version of His Latin Jazz Explosion band to Sarasota on Monday, November 22. As befits its name, the band and its leader were on musical fire all night for this Jazz Club of Sarasota concert.

Figueroa spent many years as a leading Latin percussionist in New York City, working with a wide variety of major musicians, including Miles Davis, Sonny Rollins, David Bowie and Chaka Khan. This Bronx native who was raised in Puerto Rico has been based in Miami for the past 20 years.His group for this concert included pianist Martin Bejerano (a longtime member of drummer Roy Haynes' Fountain of Youth Band), bassist Carlo De Rosa, tenor saxophonist Troy Roberts (a frequent collaborator with B-3 player Joey DeFrancesco), and trumpeter Cisco Dimas.

Figueroa's program stretched nearly two hours, not counting a brief intermission, and included extended explorations of nine tunes that showcased the cohesiveness of the band's groove and the improvisational skills of each player.

Pianist-composer Michel Camilo's fiery “And Sammy Walked In” quickly set the tone for the evening. Bejerano's “Origin Story” was wide-ranging in its moods, particularly during his piano solos. The first set highlight was the band's take on theballad “If Ever I Would Leave You, from the Lerner & Lowe Broadway musical Camelot. They dug into a Horace Silver arrangement, adding a strong Latin jazz tinge that Figueroa aptly described as “rice and beans.”

The second set was quite something, as the band romped through both the bebop canon and Latin jazz material. It included Cedar Walton's instrumental chestnut “Firm Roots;” the Latin ballad “El Último Suspiro” (The Last Sigh), which was a 1950s hit for Sammy's father, bolero singer Charlie Figueroa; and pianist Eugene Uman's “Niko's Dream.”

Uman's cha-cha-cha tune was a burner that featured Figueroa's mastery on his three congas, set center stage, and the two horns.