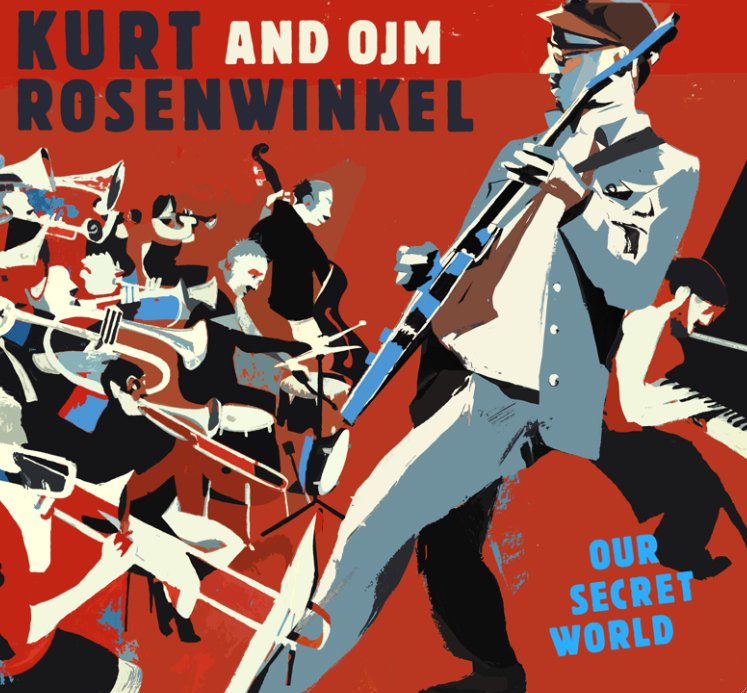 Kurt Rosenwinkel has always given us music that has conveyed a sense of masterful story-telling & breathtaking imaginative reach. His significance to the ever-evolving jazz tradition in fact transcends the oft-cited lineage of jazz guitar in much the same way that Thelonious Monk and Wayne Shorter both impacted colleagues much beyond the scope of their respective instruments. For what has perhaps distinguished Kurt more than anything is his one-of-a-kind compositional voice—full of mystery and power, marked by an effortless marriage of high complexity and simple, undeniable emotional appeal. These qualities, hallmarks of Kurt's output from the beginning, are apparent perhaps as never before on a new big band release, Kurt Rosenwinkel & OJM: Our Secret World.

In recent years, Rosenwinkel has had several opportunities to play his music with a number of different big bands, from a Nonet at the Pori Jazz Festival in Finland to the famous Concertgebouw Orchestra in The Netherlands, and he grew tantalized by the expanded textures that a large ensemble could offer his far-reaching compositions. Then in 2007 Rosenwinkel got a call from the Orquestra Jazz de Matosinhos (OJM), a Portugal-based big band with an impressive track record of collaborative projects, ranging from Portology with Lee Konitz and Ohad Talmor, over Orquestra Jazz de Matosinhos Invites Chris Cheek, featuring the acclaimed American saxophonist, to performances with Maria Rita—the highly successful and critically acclaimed daughter of Elis Regina.

Following a series of successful concerts in Portugal in 2008, Rosenwinkel and OJM decided to pursue this recording project, which took place over a 6 day period in September 2009. “We had three days of rehearsal which were totally intense—hour rehearsals with almost no breaks," Rosenwinkel recalls. “What made the whole project work was the attitude and enthusiasm of all the musicians. I really felt that everybody was supporting me, supporting the music, and really giving their best. It was a great challenge for them and they rose to the occasion. The spirit that was present during the whole thing was just beautiful."

Now the OJM can add to that collaborative track record Our Secret World, a set of Rosenwinkel compositions heard in gripping new arrangements for large ensemble. Our Secret World is Kurt's third release on the independent Wommusic imprint, following 2009's acclaimed Standards Trio offering, entitled Reflections and his 2008 album entitled The Remedy—Live At The Village Vanguard (initially distributed via Artistshare).

The specific Rosenwinkel cuts heard on Our Secret World were chosen solely by OJM arrangers Carlos Azevedo and Pedro Guedes, with no advance input from the composer with the one exception of track 4 “Dream of the Old." “I've got to hand it to them," says Rosenwinkel. “They chose the hardest stuff from my repertoire. I was psyched—it gave me a really good indication of how serious they were."

The results are indeed serious, and stunning: Azevedo brought a firm yet sensitive touch to “Our Secret World" (from Heartcore), “Zhivago" (from The Next Step), “Dream of the Old" (from The Enemies of Energy) and “Turns" (previously unreleased, though long part of Rosenwinkel's live small- group sets). Guedes weighed in with a poetic reimagining of “Use of Light" (from Deep Song as well as The Next Step).

In addition, Ohad Talmor, a saxophonist and gifted composer in his own right, was approached by OJM to arrange two of Rosenwinkel's pieces, “The Cloister" (from Deep Song) and “Path of the Heart" (from The Next Step). “Ohad was a special case," says Rosenwinkel, “because he did something completely radical. We met before the session and I told him, 'Go ahead, make new sections, do whatever you want.' And he ran with it. His arrangements are like a cubist reorganization of my songs, using what I wrote as RAM. He put it in a bag, shook it up, and saw where it came out."

There are a host of details to be savored on Our Secret World, from the high-pressure intensity of “Turns" to the aching microtonal inflections on the out-chorus of “Use of Light"; from the explosive reeds soli on “Zhivago" to the doubling of bass clarinet and Rosenwinkel's vulnerable singing voice on “Dream of the Old." Even with Talmor's more extensive and sweeping rearrangements, the elusive qualities and melodic intentions of the original pieces still lurk deep within.

Together, all the arrangers involved in Our Secret World struck an ideal balance, emphasizing different aspects of Rosenwinkel's identity and highlighting a quality summed up by The Ottawa Citizen's jazz critic Peter Hum: “It's a special triumph when art like Rosenwinkel's makes the strange so familiar."The biggest challenge, Rosenwinkel recalls, was serving as “the main narrative or protagonist voice leading a big band. It requires great strength to be the melodic voice that's supported by that much energy. You have to figure out how to make yourself the final element that's going to crest the entire arrangement and unify it. You have to invent the way to take it from here to there. You have to choose your moments, strategize about how to enter and how to exit, with what attitude, in what register. I couldn't just walk in and play my song as I knew it. It's a kind of artistry that's specific to being a soloist with a big band. That was a unique challenge for me, and I think a real milestone."

A native of the great jazz city of Philadelphia, Rosenwinkel studied at Berklee in Boston and gained his first formative professional experiences in bands led by Gary Burton and Paul Motian. He soon became a major force on the New York scene, gaining a reputation as an innovative bandleader, composer and improviser. He displayed a strong command of jazz tradition and a great love of standard tunes, but also a determination to articulate his own language and create on his own terms. Following his early albums East Coast Love Affair and Intuit came four highly regarded discs on the Verve label: The Enemies of Energy, The Next Step, Heartcore and Deep Song. In particular, Heartcore, produced by rapper Q-Tip (formerly of A Tribe Called Quest), revealed Rosenwinkel's openness to sonic exploration beyond jazz.

The Remedy: Live at the Village Vanguard, Rosenwinkel's 2008 double-disc effort preserved that aesthetic newness in the context of a live acoustic quintet. As Jon Garelick of The Boston Phoenix wrote, “Here is tonal, song-based jazz that's free, loose, swinging, technically accomplished, emotionally warm. ... Rosenwinkel proves the pop truth that anything can be a hook—a few chords, a rhythm, any refrain that sets up or satisfies expectation." Rosenwinkel followed The Remedy with a compelling 2009 return to jazz standards on Reflections, hailed by About.com's Jacob Teichroew as “one of the most exciting albums of the year."

In 2003, after many productive years in New York, progressing steadily as a leader while racking up sideman appearances with the likes of Brian Blade, Joshua Redman and Danilo Pérez, Rosenwinkel relocated to Europe—first to Zurich, Switzerland, then to his current home in Berlin, Germany. He now heads the guitar department as a tenured professor at the Jazz Institute of Berlin and has two young sons, Silas and Ezra.