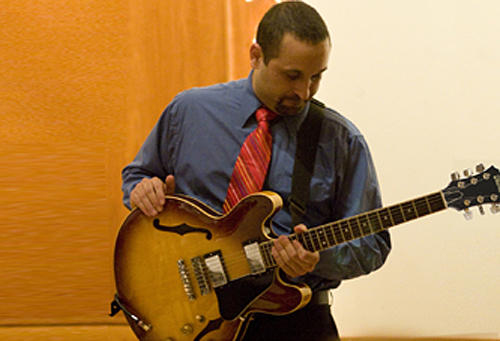 Koby Hayon was born and raised in Jerusalem, Israel. In 1999, Koby moved to Tel-Aviv to pursue his musical career, and played as a jazz guitar player in many different groups in venues throughout Israel . In 2001, Hayon moved to the United States, where he earned his BM in Jazz Studies at SUNY Purchase.

In Hayon's compositions, he fuses his heritage with his vast musical training by writing materials influenced by classic Israeli songs in a jazz setting. This combines two of the many facets of Hayon's musicality: a cultural legacy along with his malleable and innovative jazz technique.

Koby is proud to introduce his debut album “Gemini“, which was recently released.

The album features the legendary Kermit Driscoll on bass and Jerome Morris on drums.

“Koby's compositions reflect his wide range of musical experience. I can hear his Middle-Eastern roots on several of the compositions (check out his improvisations on “Norwegian Wood"), yet on many tunes, “Crumbs" for example, I hear the wide open spaces of the Midwest of America. A final note, this recording is not for those just looking for a happy diversion. It accurately reflects life today. The challenges ahead, the turmoil around the world is evident in these compositions. Koby has performed the duty of the artist."(From album liner notes, written by Kermit Driscoll)