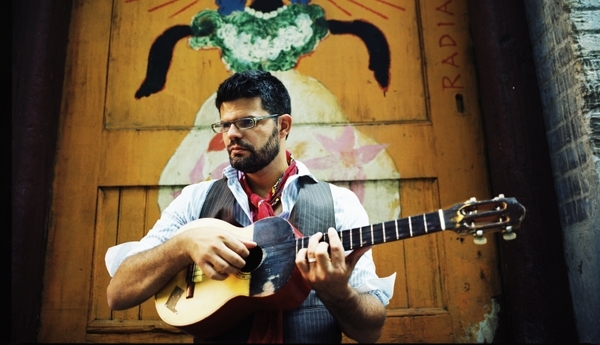 Founded by Trinidadian-Canadian songwriter Drew Gonsalves, Kobo Town takes the intricate wordplay of classic Caribbean music and runs it through a 21st Century filter. In the world of Kobo Town calypso, roots reggae, and acoustic instrumentation meet innovative production techniques, social commentary and indie rock attitude. Kobo Town’s second album Jumbie in the Jukebox will be released in May, 2013 by Stonetree and Cumbancha.

On Saturday, January 12 Kobo Town will be performing in New York as part of the Mundial Montreal showcase at The Living Room. The event takes place during the influential Association of Performing Arts Presenters (APAP) Conference and will feature some of the most exciting up-and-coming talents in the Canadian music scene.

Kobo Town was formed in 2004 when Drew Gonsalves, a Trinidadian of Portuguese descent, joined other Trinidadian expats and musicians from the Caribbean diaspora living in Canada. Gonsalves was raised in a middle class suburban town outside Port-of-Spain but his family relocated to Canada when he was 13 years old. Even though he was exposed to a lot of music growing up in the island, the local folklore tradition of calypso music wasn’t at the center of his interest back then. Like most of the youth of his socioeconomic background, he was mostly influenced by American and British rock music.

It wasn’t until he relocated to Canada that the prism of nostalgia and genuine interest in his country’s history led him to explore the rich traditions of calypso music, mostly by digging through bins of old records in second-hand stores. “Calypso is the English folk music of urban Trinidad,” explains Gonsalves, “And the calypsonian, or calypso singer, is like a singing newspaper that comments on the events of the time. His role is halfway between court jester and griot.”

With that in mind, Gonsalves formed Kobo Town (the name references the neighborhood where calypso is said to have been born) and released an acclaimed debut album in 2005. Jumbie in the Jukebox, the title of their forthcoming sophomore album, refers to the jumbie, a spirit in Trinidadian folklore. According to Gonsalves, “A jumbie fulfills many roles. Its used to frighten children, sort of like boogie man. It evokes a sense of mystery about the world and all of the strange forces that influence its course.”

For Jumbie in the Jukebox, Kobo Town teamed up with Ivan Duran who produced the album and brought to the band a new perspective and inspiration. “Ivan introduced me to a vast array of new sounds, especially the vintage equipment that collects dust in his studio,” remembers Gonsalves. Ivan Duran is well known for his masterful work on the now classic Wátina from Andy Palacio & the Garifuna Collective that earned a 2007 WOMEX Award and was selected by Amazon.com as “The Greatest World Music Album of All Time.” The result of the collaboration between Kobo Town and Ivan Duran is a striking recording that reflects their mutual commitment to revive the folkloric music of the West Indies by taking it in contemporary directions. The album was recorded in Montreal, Trinidad, Belize and Toronto, where Kobo Town is based.

Don’t miss Kobo Town peforming songs from their upcoming album during their performance at The Living Room as part of the Mundial Montreal showcase on January 12.