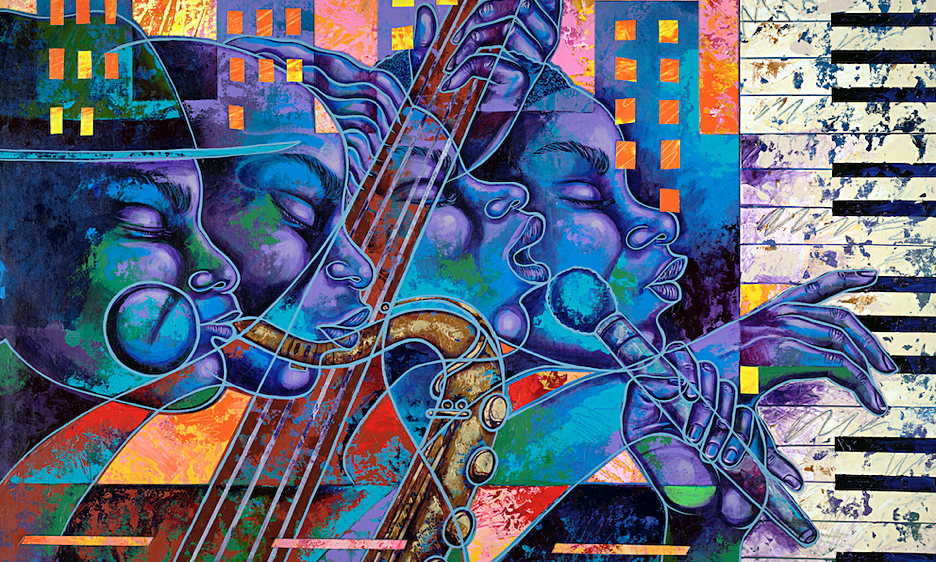 My work attempts to capture SOUL while depicting positive representations of African American life. My creations are a reflection of my personal values and pay homage to ongoing themes of unity, family, and spirituality.
—Larry "Poncho" Brown

Keystone Korner Baltimore is proud and excited to display a long-term exhibit of the extraordinary artwork of Baltimore's own Larry “Poncho" Brown! These colorful paintings beautifully compliment the musical atmosphere with fluidity, mysticism, unity and pride. Keystone Korner Baltimore feels so blessed to enrich the walls of our club with soulful art that captures the essence and beauty of the city we proudly call home. Come experience the remarkable exhibit for yourself and enjoy the legendary Freda Payne, honoring our First Lady of Song Ella Fitzgerald November 12-14.

This Thursday-Friday-Saturday, Ms. Payne will be performing Live and Online from the Keystone stage with her outstanding band including Frank Owens on piano, Herman Burney on bass and Quincy Phillips on drums. The multi-talented Payne is best known for her singing career, yet she has also performed in musicals and acted in movies over the years, and was briefly the host of her own TV talk show. Born Freda Charcilia Payne in Detroit, Michigan, Payne developed an appreciation of music at an early age (due to such sultry jazz singers as Ella Fitzgerald, Sarah Vaughan, and Billie Holiday).

Larry “Poncho” Brown, is a native of Baltimore, MD. He started his first business at the age of 17 as a signwriter and he has been a full time artist ever since. Poncho received his Bachelors of Fine Arts degree in graphic design and photography from the Maryland Institute College of Art, Baltimore, MD. His art, both fine and commercial, has been published nationally in Upscale, Ebony, Ebony Man, Essence, and Jet magazines. His art is featured in the UCLA Fowler Museum of Cultural History book entitled “Wrapped In Pride” and “Connecting People With Art”. His popular works have been prominently featured on several TV shows including “A Different World”, “In The House”, “The Wire”, “The Carmichael Show”, “Star”, and “Greenleaf”. Movies featuring his art include “Avalon”, “He Said, She Said”, and “Soulfood”. His work adorns the walls of the likes of Bill Cosby, Dick Gregory, Anita Baker, Susan Taylor, Ed Gordon and Bernard Bronner just to name a few.

“My work attempts to capture “SOUL" while depicting positive representations of African American life. My creations are a reflection of my personal values and pay homage to ongoing themes of unity, family, and spirituality”.