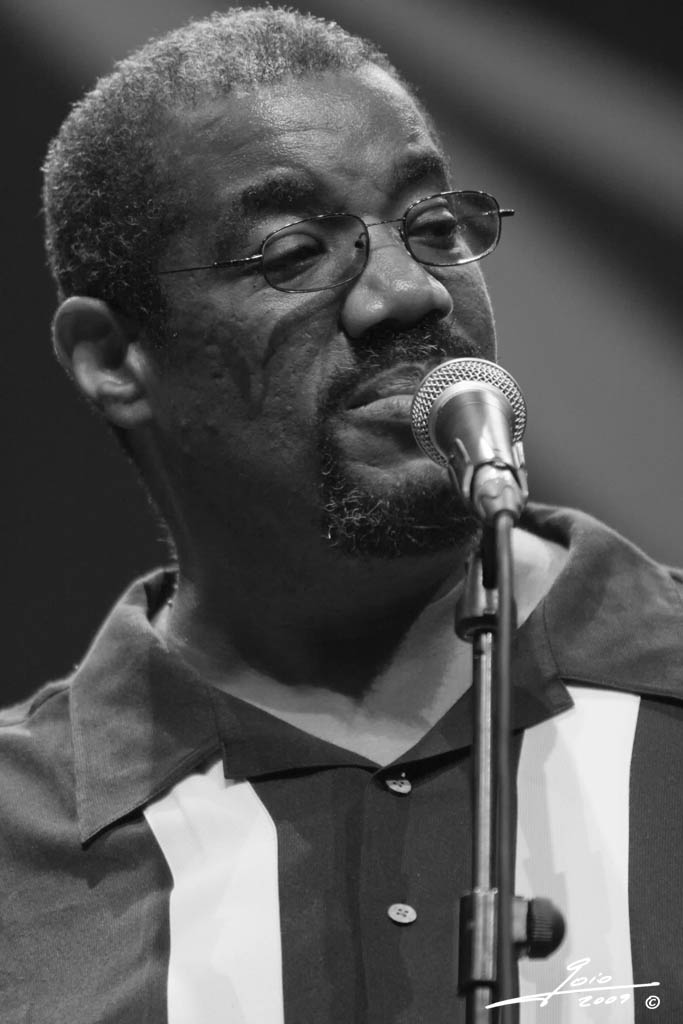 slideshow
We are proud to announce the 3rd annual South Bend Jazz Festival, Saturday, August 16th from 4:00 p.m till 11:00 p.m; in front of the Morris Performing Arts Center. Free to the Public!

Featuring Six international acts from a Variety of Jazz genre.

His broad baritone was forged in his hometown: the legendary jazz metropolis known as Kansas City; where he learned to swing like Charlie Parker, shout the blues like Big Joe Turner, and cry a ballad like Lester Young; while, extending, elaborating and refining the jazz vocal legacies of Lambert, Hendricks & Ross, Eddie Jefferson and Al Jarreau.

Mahogany released his debut recording, Double Rainbow, was released on the Enja label in 1993. His CDs include, The Music of Charles Mingus; which featured Mingus sidemen trombonist Jimmy Knepper, alto saxophonist Charles MacPherson with the WDR Big Band, to Pride and Joy, his ebullient Motown tribute featuring the music of Stevie Wonder, Marvin Gaye, The Temptations, Gladys Knight and the Pips, Michael Jackson and Smokey Robinson and the Miracles. He’s recorded with T.S. Monk (Monk on Monk), The Ray Brown Trio (Christmas Songs With Ray Brown), Marlena Shaw (Dangerous), Roseanna Vitro (Passion Dance), Carl Allen (Testimonial), Barbara Morrison (Visit Me) and Elvin Jones (It Don’t Mean A Thing). Mahogany made his screen debut in the 1996 Robert Altman film Kansas City, portraying a character based on blues singer Big Joe Turner, and was also featured on the soundtrack.

Facan started music in 1970, concentrated on jazz in 1975. Mainly self-thaught as a jazz guitarist, player, composer, arranger and lyrics writer. Played with a great variety of local and international jazz musicians, he released 13 CDs out. He owns Nardis Jazz Club in Istanbul.

In 1997 Focan performed in the Guitar Night which was organised by MIDEM with 11 international guitarists representing Istanbul Culture and Arts Fund (IKSV).

The Artist’s 1998 CD, BENEATH THE STARS honoured him as the one and only Turkish jazz artist who has released an album on Blue Note label. This album featured the great drummer Bill Stewart and Hammond B3 player Sam Yahel.

Dlamini came to New York from her Native South Africa to perform in the Broadway cast of Sarafina. Then went on to join the original cast of the Lion King playing Rafiki. She also performed in Godspell and the iconic Riverdance. She has recorded with Grover Washington on “Soul Strut and “Power of One”; Tupac on “A River That Flows Forever" and with Johnny Mathis. TV appearances include a performance with Diana Ross on the Oprah Winfrey show, the Jay Leno and Arsenio Hall Shows, the Essence Awards, the Tony Awards; and live in concert at the United Nations in NY.

Lerman is a riveting saxophonist who has performed with Peabo Bryson, Howard Hewett, Norman Connors and Danny Boy, among others and shared concert bills with Herbie Hancock, Michael Brecker, Sergio Mendes, Richard Elliot, David Benoit, Eric Marienthal and the Ghetto Boys. Lerman’s CD’s “Do You Feel?,” “Danny’s Island,” and “Meow Baby,” have received much airplay from the USA to Venezuela, Turkey, Hong Kong , South Africa and Holland. Lerman has also performed with symphonies in the USA and the Netherlands featuring his original music.

As a multi-talented musician, vocalist, song writer and producer, Darryl's artistry continues to blossom. He has been recording and producing many music projects at his recording studio in South Bend, IN. He is the owner of the Planet Love Music Publishing Co. BMI and will release two music CD projects in 2014. One with Chicago producer and former NFL player, Don Carlos Passmore and the other an all instrumental CD. When not doing tours behind other artist, Darryl performs at festivals, Casino’s and venues with his band “Darryl B. & REFLECTIONS", one of the hottest bands in the Midwest. On August 29, 2009 Darryl Buchanan was awarded the certificate of recognition by then city of South Bend, Mayor Stephen J Luecke for his accomplishments during his thirty years in the music industry.

Wright's style cannot be easily categorized. Trained as a jazz improvisor at the New School for Jazz in NYC, he's also passionate about sacred music. Palestrina and Bach vie with Monk and Cannonball Adderley as just a few of his harmonic and melodic inspirations. While with the U.S. Naval Academy Band, Wright performed for the President—as well as several other high-profile diplomatic gigs—and with the Caribbean Jazz Project: Afro Bop Alliance, recording and performing with vibraphonist Dave Samuels, which was nominated for a GRAMMY and won a Latin GRAMMY. He recently recorded his debut album of original compositions and covers from Jon Brion, Sufjan Stevens, and Phil Collins.

His CD debut “Inward Looking Outward" with Ropeadope will be released on August 19th, 2014. The recording features his piano trio with Ike Sturm on bass and Nate Wood on drums, and includes six original compositions, as well as covers from Phil Collins, Jon Brion, and Sufjan Stevens.