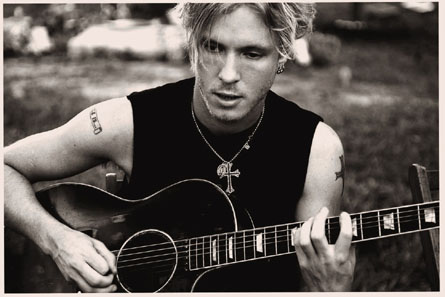 This is Kenny's 5th GRAMMY nomination. The Kenny Wayne Shepherd band is honored to be nominated alongside acclaimed artists like the late Solomon Burke, Dr. John and The Lower 911, Bettye LaVette and the inimitable Buddy Guy. The 53rd Annual GRAMMY Awards will take place February 13th, 2011 at 8PM ET/PT on CBS.

LIVE! In Chicago is Kenny Wayne Shepherd's 5th straight #1 album, an achievement matched solely by fellow guitar man Eric Clapton. Only luminaries like Joe Bonamassa (6), B.B. King (8) and Stevie Ray Vaughan (9) have scored more than 5 consecutive chart toppers. LIVE! In Chicago went on to spend 4 weeks at #1 on the Blues chart, where it currently resides at #3. Recorded in Chicago's House of Blues during the critically acclaimed 10 Days Out: Blues From The Backroads tour, LIVE! In Chicago showcases Kenny and his band, Noah Hunt, Chris Layton, Scott Nelson and Riley Osbourn, along with special guests, Hubert Sumlin, Willie "Big Eyes" Smith, Buddy Flett, Bryan Lee and Tommy Shannon (of Double Trouble).

The news of a GRAMMY nomination comes just weeks after Kenny's appearance on Late Night with Jimmy Fallon, where Kenny played the original Jimi Hendrix Woodstock Stratocaster along with fellow GRAMMY nominees, The Roots.

Originally founded in 1980 in the Netherlands, Roadrunner Records earned its place as one of the most prominent international independent record labels. Established primarily as a hard rock label, Roadrunner now boasts depth and variety in its artists. The label has recently experienced unprecedented success with multi-platinum artists Nickelback and Slipknot, near-platinum Theory of a Deadman, gold-certified Stone Sour and Killswitch Engage, as well as modern heavy hitters Korn, Dream Theater, Megadeth, Trivium and Opeth. Roadrunner's current roster also includes such diverse acts such as The Parlor Mob, plus up and comers like Young The Giant, Black Stone Cherry and Airbourne. Roadrunner catalog includes now-classic albums from seminal artists such as Type O Negative, Sepultura and King Diamond.