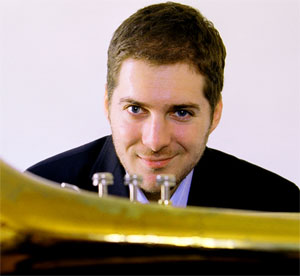 “I continue to wait and watch what he will do next [Nick is] a person who will redefine the role of the trombone not only in small ensemble playing, but also in the way we perceive the instrument in the musical community." - Terence Blanchard on Nick Vayenas

World Culture Music artist, trombonist/composer Nick Vayenas, applauded by the great trombonist Hal Crook for beginning to reinvent the instrument, is a superlative artist: open-minded, professional, technically facile and magnificently distinct. His music is at once fascinating, exciting, inspiring, emotionally gripping, and most of all, enjoyable. Placing importance on honesty in music, Vayenas is an artist without a strict allegiance to any particular style or genre. He is intent on playing and composing music with sincerity and conviction in order to naturally connect with audiences and fellow musicians on a deep level. Nowhere is this more apparent than on his brilliant debut CD release, Synesthesia, on Kendrick Scott's World Culture Music label. In stores and online on February 26, 2008.

From the opening bars of the charged album opener, “Voyager," the level of intensity and beauty is set high. Vayenas' explains the story behind the composition, “This tune was composed as an ode to the spacecrafts Voyager I and II - they were launched in 1977 and continue to explore our solar system as two of the furthest man-made objects from the earth." Vayenas' solo on this track is a masterpiece of structure, phrasing and rhythm. It clearly reveals the influence of trombone masters such as J.J. Johnson, and the ability Vayenas has to translate that influence into a melodically rich and harmonically advanced voice of his own. Drummer, and World Culture Music founder, Kendrick Scott recorded two drum tracks here, “One provides a pulsating beat that drives the tune while the other interacts with the soloists." Showcasing his multi-instrumental talents, Vayenas recorded all of the instruments on “Assembly Line" with the exception of Scott on drums. The title track, “Synesthesia," also finds Vayenas delivering on not only trombone, but also valve trombone, vocals, percussion, Fender Rhodes, and even programming. He explains the construction of this track, “The blend of trombone, Rhodes, and voice creates a haunting, evocative atmosphere. This tune was written from a visual perspective. I want to compose music like a painter paints. I thought of the song's melody as the subject matter, the harmony as the color, and the rhythm as the canvas." He also captures this approach with broad strokes of harmony and melody on the beautiful ballad “Along The Way," which Vayenas explains, “combines impressions of both darkness and light, and is representative of the uncertain, unbalanced path of life."

More on Nick Vayenas: Born in Boston, Massachusetts, Nick started playing the trombone at the age of twelve. He comically recalls that his arm was too short to reach the lower positions of the instrument; “I was the worst student in the class because the instrument was as big as I was." This quickly changed. After discovering jazz and listening to extensive recordings in high school, Nick rapidly excelled on his instrument. Trombonist J.J. Johnson with his incredible tone, amazing technique and ability to play modern jazz, became an immediate and lasting influence that brought Nick's thinking to a new level. “He showed me what is possible when you free yourself of restrictions," Nick reflects. It was at this point that Nick decided to pursue a career in music, subsequently receiving a scholarship to the Berklee College of Music.

Berklee proved to be an enlightening experience. Exposed to musicians from around the world, Nick formed lasting friendships and gained valuable contacts during that time. At the end of his four years, Nick headed to New York City to continue his education at the Manhattan School of Music, graduating in 2001 with a Masters of Music degree in jazz performance.

The spring of 2001 brought Nick yet another opportunity to continue to hone his skills and develop as a complete performer when he was accepted into the prestigious Thelonious Monk Institute of Jazz. Selected by Terence Blanchard (the artistic director), Wayne Shorter and Herbie Hancock, Nick joined six other talented musicians in a two-year full- scholarship program. He received personal attention from jazz masters such as Dave Holland, John Scofield, Lewis Nash, Mark Turner and Blanchard. The Monk Institute Ensemble (MIE) performed extensively in 2002, most notably at the Umbria Jazz Festival, St. Lucia Jazz Festival, the Cleveland Jazz Festival, and the Santa Fe Chamber Music Festival. In their final year, the MIE recorded an album of its member's finest compositions and arrangements, featuring Hancock, Shorter, and Blanchard.

Although touring with Michael has kept him busy, Nick continues to pursue and maintain his own musical identity with the release of Synesthesia.

World Culture Music is an artist collective record label and multi-faceted music company that was created by Kendrick Scott to form an alliance of like-minded musicians who are making a significant impact on both today's jazz scene and on music in general. WCM's mission is to blur the labels in music, cross the cultural divides, bypass the corporate structure and provide the next generation of talent an outlet to fulfill their creative visions.