Bluesy passion... 'Guitar Fantasies' showcases Silverman's originality as a composer and his superb skills into melding divergent traditions into a cohesive whole. --Hrayr Attarian, All About Jazz 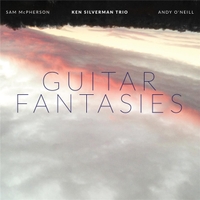 slideshow
With Guitar Fantasies Ken Silverman continues on the path he started on the 2015 release Parallel Man (Soundseer). The focus is again on the multifaceted melodies that simultaneously reflect elements of various genres while remaining anchored in the jazz idiom. While on Parallel Man there were more western classical motifs on the current album rock influences predominate.

The three “Guitar Fantasies" demonstrate this amply. On number 2 Silverman's nimble and brisk strums together with bassist Sam McPherson's taut reverberating lines and drummer Andy O'Neill's fiery gallop create the energetic head. The tune's center is warmer and more mellow with Silverman striking the right balance between mellifluous, twangy embellishments and a touch of intriguing angularity. His expansive solo fades into the resumption of the opening refrains that conclude on a retro-pop note.

There are intriguing changes within each piece that keep the momentum going. This is demonstrated best on the thrillingly chameleonic “Wiggle Wee 1, 2 And 3." The track opens with rapid crescendo crystalline rhythms that push up the tempo with lithe virtuosity. The melody tumbles like a water fall as individual trio members burst through with ardent and dissonant brief spontaneous phrases. A melancholic and expectant mood follows with McPherson taking center stage with an intimate and poetic soliloquy. The mystical ensemble play usher in the closing bars with a nocturnesque ambience.

—Hrayr Attarian, All About Jazz