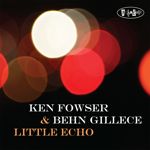 It's not unusual at all for the tenor sax and the vibraphone to appear on the same jazz record; we've heard these on countless jazz recordings. But by co-leading a record, saxophonist Ken Fowser and vibraphonist Behn Gillece gives us fairly rare opportunity to hear both instruments as the two lead voices sharing equal billing. Little Echo, which went on sale last Tuesday, is in fact the second album by this emerging duo, Full View being their first.

Don't let the youthfullness of these fellows fool you, Ken Fowser and Behn Gillece have played jazz together since they were teenagers growing up in the Philadelphia area in the 90s. In NYC since 2006, they have quickly established themselves there, finding much success with their debut record Full View, released at the beginning of last year. And now there are back with more.

Fowser and Gillece are of one mind when it comes to their concept of jazz. Their small-combo mainstream style places a strong emphasis on swing, and everything they do with their music starts there. Backing up these two gentlemen on Little Echo are bassist Ugonna Okegwo, drummer Quincy Davis and Rick Germanson (who released the first-rate Off The Cuff album last year) on piano. Though this is a different lineup from their previous record, Fowser and Gillece again freshen up the classic jazz concept with nine classic-sounding originals.

“Resolutions" sets the tone with a snappy, well-defined bebop head that's stated by both leaders and used as a launching point for solos by Fowser, Gillece and Germanson that are crisp and to the point. The program continues with the same kind of pleasing, unfussy brand of modern jazz composed by either Fowser or Gillece: Fowser's “Ninety Five" follows the same formula as “Resolutions," but with a slower, mid-tempo pace; Gillece's “Sap" starts off with a knotty intro consisting of some harmonic somersaults before kicking it into a snappy, 2/4 groove. “Dog Days," also written by Gillece, is a ballad, and not surprisingly at all, the duo shows they are quite good at playing it soft and sultry when soft and sultry is called for.

“Vigilance" is another burner, but also a tune where shifting time signatures are used effectively. Fowser and Gillece harmonize the tricky lines well, and Fowser's big, soulful tone followed by Gillece's thoughtful lines that have echoes of both Milt Jackson and Bobby Hutcherson. And speaking of “echoes," the extended title track, written by Gillece, cooks along at a medium stride and allows for lengthy improviding by Gillece, Fowser, Germanson and, briefly, Davis. The last three remaining tracks “One Step At Time," “You" and “Another View" continue in the same vein as the prior tracks, delivering strong melodies and solid chops amply supported by the Okegwo/Davis rhythm section.

Fowser and Gillece subscribe to the “two heads are better than one" theory, and it's clear from my ears that this theory has worked out well in practice. Little Echo, like their first release Full View, is another quality release coming from Posi-Tone Records.