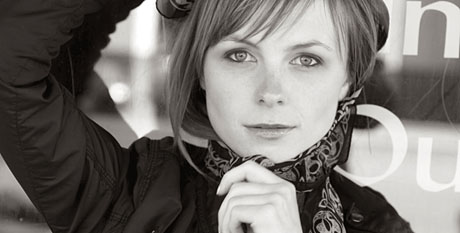 Vocalist Kat Edmonson and her Sextet will perform on Sunday, Sept 6, at 12:30 pm in the Jazz Cafe at the Tanglewood Jazz Festival in Lenox, Massachusetts.

Edmonson’s original song, “Lucky” (previously released as an MP3) was featured on the nationally broadcast television program, “The United States of Tara,” produced by Steven Spielberg on the Showtime network.

Nate Chinen of the New York Times says Edmonson … “is a promising young jazz singer with a kittenish voice and an amiably relaxed style,” and Michael Corcoran of the Austin-American Statesman, calls her “Austin’s Great Jazz Hope.”

The Jazz Caf is an informal, cabaret-style venue featuring emerging artists. Past Jazz Caf performers have included Esperanza Spaulding, Grace Kelly, Sachal Vasandani, Aaron Parks and Spencer Day, among many others. Admission to the Caf is free with a ticket to the main stage event that follows—A Piano Duet with Kenny Barron and Mulgrew Miller followed by the 2009 Grammy winning Vanguard Jazz Orchestra.

For complete ticket information and an overview of the festival which takes place September 4-6, go to tanglewoodjazzfestival.org or call SymphonyCharge at 888-266-1200.