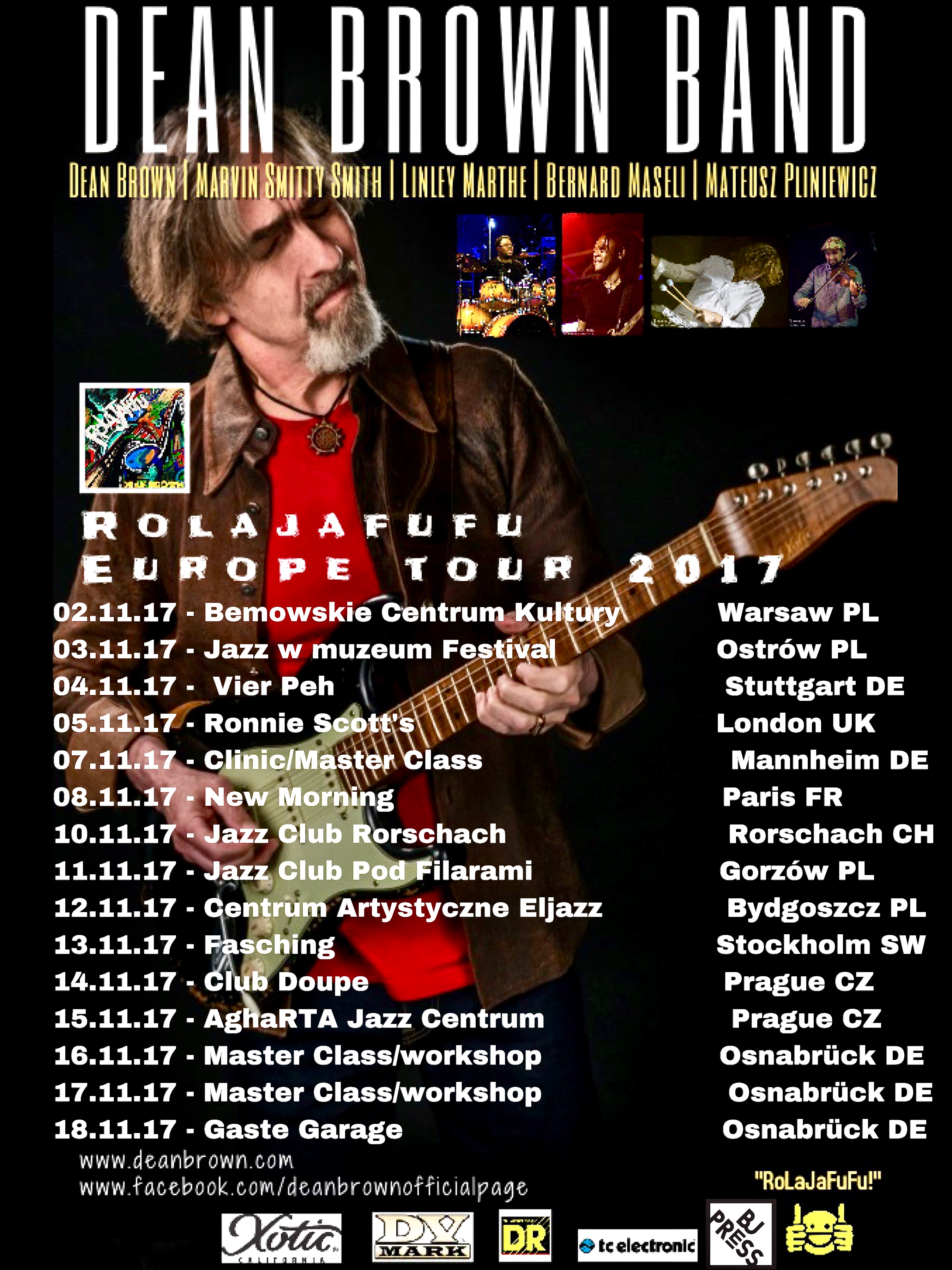 Guitarist and composer Dean Brown has always done things his way. Nowhere is that in greater evidence than on ROLAJAFUFU, his fifth album as a leader. The title is a playful acronym that encompasses rock-Latin-jazz-funk- fusion, the universes Brown explores on this diverse, kinetic recording. Brown’s fiercely independent streak is also exemplified by the fact that this album was funded by his denizens of fans worldwide via PledgeMusic.

It’s Brown’s first self-released album, after four celebrated previous discs on the ESC label. He initially embarked on a successful solo career in 2001 after establishing himself as one of the most versatile, first-call virtuoso guitarists in the jazz, rock and funk worlds. Just a few of the global icons he’s worked with include Marcus Miller, Brecker Brothers, Billy Cobham, David Sanborn, Bob James, George Duke, Roberta Flack, Lenny White, and Joe Zawinul. His collective experience playing with these legends is mirrored in the ambitious nature of ROLAJAFUFU.

The 11-track album is Brown’s most personal statement to date. It takes inspiration from James Brown, John Coltrane, Jimi Hendrix, Sly Stone, and McCoy Tyner and channels it into multifaceted pieces ranging from the piercing to the poignant.

“Virtually everyone that played on the record already knew the pieces inside and out because they had played them live,” says Brown. “When it came time to put the record together, everyone just laid it down and nailed it. It’s an album made by people that lived and breathed these songs for weeks and months.”

The acronym ROLAJAFUFU speaks to the album’s wide-ranging perspective. But Brown wasn’t exploring myriad musical worlds simply for the sake of it.

“I really wanted this album to capture all of my musical personas in one place for the first time,” says Brown. “Every one of these genres, and the intersections between them, represent the compositional interests I have. What each piece has in common is that every one of them started with a strong melody. From there, I built the song around that core, rather than throwing in things just because they sound cool or clever. There’s lots of burning playing on the album, but it’s all filtered through serving a specific vision. Everything in my pieces serves a purpose so I can tell stories through the work.”

Part of the proceeds from Brown’s PledgeMusic campaign went to the VH1 Save The Music Foundation, a charitable organization determined to ensure public schools in the U.S. continue having the ability to provide music education in the wake of government cutbacks.

“I firmly believe music should be an essential part of the educational process for kids of all ages,” says Brown. “It hurts me to know many kids across the country no longer enjoy the significant benefits music education delivers. It’s why I wanted my album to help create awareness for this issue, as well as contributing to the solution.”

Brown’s perspective is that the power of music extends far beyond what goes into people’s eardrums. He experiences that every time he writes and performs. Anyone that’s seen Brown live understands how that translates into a charged, emotional experience that leaves no doubt about his intimate relationship with the muse. It’s common to see Brown leaping about with wild abandon at his gigs to the delight of the audience.

“I feel like I’m tapping into a higher energy when I write and perform. It’s about respecting the muse. I try not to think about it too deeply and just channel the flow. It’s about being open to inspiration and enabling an energy conversation to take place. I’m not interested in filters. ROLAJAFUFU is about pure inspiration. I’m thrilled with the end result and hope it inspires everyone who hears it as well.”

Dean Brown's music defies boundaries to combine Rock, Latin, Jazz, Funk, and Fusion into a joyful, soulful, dynamic and intense groove. He is well known in the global jazz/fusion scene for his powerful virtuosic rhythm guitar work and his passionate melodic soloing. Those who have seen and heard Dean perform are immediately pulled in by the energy he puts into each and every note.

Since starting to play professionally with his own group at the age of 13, Dean has toured all over the world with his projects and performed and recorded alongside legendary artists such as: Marcus Miller, The Brecker Brothers, Billy Cobham, David Sanborn, Bob James, George Duke, Roberta Flack, Bill Evans, Randy Brecker, Victor Bailey, Joe Zawinul, Simon Phillips, Lenny White, Kirk Whalum, and Steve Smith's Vital Information, just to name a few.

Over the years Brown has been interviewed in Guitar Player Magazine, Guitar World, Jazz Life, Gittare & Bass, Big Box, Muzikus, and Guitarist Magazine along with well known online publications. His performances have also included television appearances on The Tonight Show With Jay Leno, The Arsenio Hall Show, After New Year's Eve With David Sanborn, The Rosie O'Donell Show, BET, Bravo, and many top television and radio shows throughout the world.

As an educator and clinician Dean Brown has conducted masterclasses at universities, schools and venues around the world. He regularly teaches several popular classes of his own curriculum at Musicians Institute in Hollywood, California since 2006. Dean has had instructional articles in Guitar Player Magazine (US), Guitar World (US), Gittare and Bass (G), Bass Player, Jazz Life (Jp), Big Box (I), Muzikus (Cz), Guitarist (Fr), and 20th Century Guitar (US) magazines. He has also released an instructional/live DVD with publishing giant Hal Leonard titled “Modern Techniques for the Electric Guitarist"(2008).