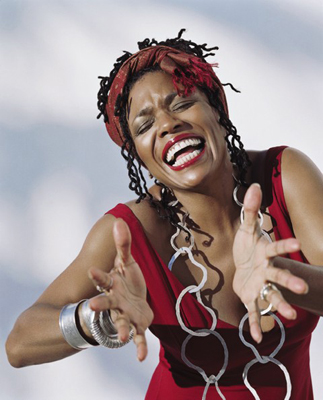 slideshow
“JumpinJazz Kids is a great model for what needs to be presented to young people. The age group that it targets is a great addition to music, and it’s wonderful for any organization or school. The manner in which it’s presented strikes a nerve – everyone should take a look at it and listen to it!” — Dr. Billy Taylor

Los Angeles, CA. “JumpinJazz Kids – A Swinging Jungle Tale” celebrates the rich history of Jazz and Popular music by paying tribute to its legendary pioneers through story, song and a variety of musical styles. This unique blend of classic storytelling and fun, original jazz/pop songs are performed by world-renowned jazz artist’s Dee Dee Bridgewater, Al Jarreau and Hubert Laws and backed by an energetic jazz quartet, full symphony orchestra and narration and voice characterizations by James Murray. “JumpinJazz Kids – A Swinging Jungle Tale” introduces children to the imaginative worlds of jazz, the spoken word and the Symphony in a fun yet educational, engaging and unique way. Produced and created by music industry veterans Steve Barta and Mark Oblinger, “JumpinJazz Kids – A Swinging Jungle Tale” is set for release September 25th.

Said Barta and Oblinger, “Our main goal is to provide quality children’s entertainment that fully engages the listener’s imagination. “A Swinging Jungle Tale” supports this idea through our “Imagination Is Me!” concept that requires the listener to actively visualize the story and imitate the animal dance movements in each song to become a “real” part of the tale. We believe that with the quality of the music, the magnetic performances of the artists involved and the imaginative nature of the story, “JumpinJazz Kids” has something “wonderful” to offer all ages.”

All three artists – Bridgewater, Jarreau and Laws – were equally enthralled with the project and offered their support immediately when approached to participate and their performances from the downbeat let you know that this is no ordinary children’s CD. Bridgewater’s unparalleled chops are featured on “This Elephant’s Gerald,” while Jarreau’s playful vocals highlight “Do The Monkey Swing” and “Hubert Hummingbird.” Laws adds flute to both a song named in his honor, “Hubert Hummingbird” and “Her Name Is Little Growl.”

“JumpinJazz Kids” is a unique line of children’s music that combines classic narrative storytelling with fun, pop-influenced jazz songs backed by a Symphony Orchestra. The stories follow the imaginative adventures of a seven year-old girl named Claire and her stuffed animal friends. The first title in the series, “A Swinging Jungle Tale,” finds Claire in her Grandpa’s backyard jungle looking for a “lost story” and powered by her imagination alone, Claire’s stuffed animal friends begin to magically come to life and she learns all about their world … and a little bit about herself along the way.

With the story for “A Swinging Jungle Tale” already translated and recorded in French, Japanese and Spanish, it is the vision of “JumpinJazz Kids” to develop a series of interactive CDs, books, apps, concerts and educational events nationally and worldwide with the premise being to teach jazz and symphonic history, provide music education, promote children’s physical activity through dance and movement, enlighten their understanding of the animal world and most importantly, to allow their imaginations to flow. Concerts have already taken place with full orchestra/jazz quartet in Colorado and Milwaukee and were met with widespread critical acclaim.

JumpinJazz Kids - “A Swinging Jungle Tale" - a celebration of story, song and swing . . . where Imagination is King!

Mark Oblinger is the writer, co/writer of the songs and story for “A Swinging Jungle Tale.” He is a former member of Atlantic Recording Artist “Firefall” and has a long history of award winning work as a songwriter, composer, producer and performer. He created and produced two national award winning Jazz CDs for children, “Jungle Jazz Joint Jam” and “Jazz Joint Jump” and has won 5 Heartland Emmy Awards for his work as a composer/producer for the PBS Children’s Show, “The Big Green Rabbit,” “Yesterday’s Zoo and “The Sea I See”. Mark has arranged, produced and performed on dozens of CDs for numerous national and Colorado artists including vocal work on CDs by Rock and Roll Hall of Fame member Richie Furay (Buffalo Springfield, Poco) and the Grammy nominated “The Spark” by Chris Daniels. Mark has composed music for short films and television including featured pieces for the Oprah Winfrey Show, Dr. Oz, Gaiam and theme music for Disneyworld’s Dolphin and Swan Resorts. Mark shares his Boulder, Colorado home with his wife and co-author of “A Swinging Jungle Tale.” Linda and their two children, Kyle and (you might have guessed it) . . . Claire.

Pianist Steve Barta has stayed true to his creative path for over thirty years as a Composer, Recording Artist, Producer, Author, Educator and Speaker. He has performed his original works as a solo artist with jazz ensembles and symphony orchestras. His contribution to the world of music includes fourteen recordings that reflect his many influences, particularly Brazilian, Jazz and Classical. Steve has released fourteen recordings to date. He has worked and/or recorded with the likes of Al Jarreau, Hubert Laws, Herbie Mann, Dori Caymmi, B.B. King, Dee Dee Bridgewater, Paulinho da Costa, Mike Shapiro and many more. His recordings are available worldwide via SteveBartaMusic.com, iTunes, Amazon.com, and CD Baby. Steve has written several works for symphony orchestra that have been performed worldwide. Mr. Barta is a music educator with over thirty years of experience teaching intermediate to advanced students, educators and professional musicians. Special areas of instruction for private students, clinics and Master Classes are Music Interpretation, Improvisation, Arranging and Composition.