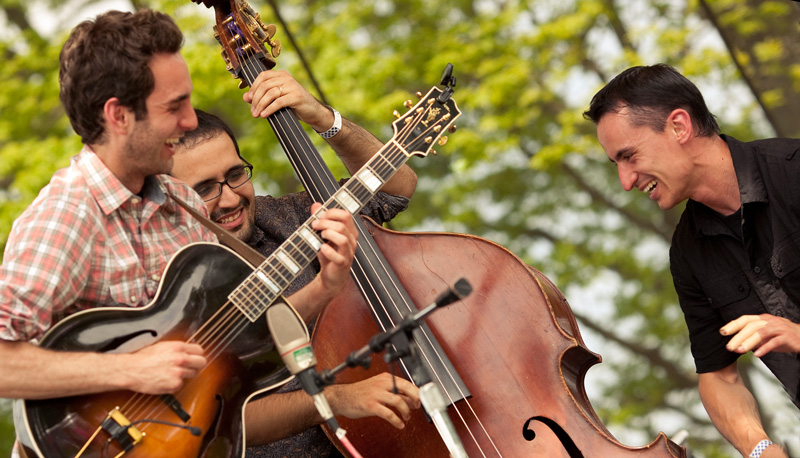 Don't get me wrong, I love jazz guitarists who derive their inspiration from guys like Wes Montgomery, Kenny Burrell and Pat Metheny, but it's so refreshing to hear a new guitarist come along who excels by taken the road less traveled. That's former child prodigy guitarist Julian Lage, who seems to be more in line with the vocabulary of swing jazz guitar pioneer Django Reinhardt, classical guitar godfather Andres Segovia and bluegrass guitar picking legend Tony Rice. And like those guys, he takes an acoustic approach to his guitar whether it's plugged in or not: there's no effects getting in between his playing and your ears.

A couple of years ago when he was around 21, Lage issued his first album Sounding Point and right away he served notice he wasn't going to make run-of-the-mill type jazz albums. With guest spots by banjo king Bela Fleck, mandolin specialist Chris Thile and fellow friend and prodigy Taylor Eigsti, Lage tactfully augmented his quartet consisting of Ben Roseth (saxophone), Jorge Roeder (bass) and Tupac Mantilla (tabla/ percussion), with cellist Aristides Rivas employed for a couple of tracks. This album was good enough to earn spots on many year-end lists and a Grammy nomination.

As a sideman, Lage has performed with such diverse notables as Eigsti, Carlos Santana (when he was only eight years old!), Metheny, Kenny Werner, Toots Thielemans, Martin Taylor, and David Grisman. He's already recorded two albums with Metheny's old boss Gary Burton, and he also stars on an upcoming release from Burton's new quartet.

For this second album of his own, Lage is already comfortable enough with his craft to attempt a theme based album, one that is loosely centered on this imaginary, quiet little berg called Gladwell. Accordingly, the album is named after this fictional town. But he hardly abandons the things that garnered him so much acclaim for that first album: the quartet is carried over, save for Dan Blake replacing Roseth on sax, and Rivas also returns to play a crucial role on cello.

“223 Butler" is a jazz song so out of the ordinary and so alien to what is thought of as jazz, I nearly peeled away this cut and made it a One Track Mind. Everything about the performance suggests several idioms but doesn't fit neatly into any of them: Mantilla's percussion follows Lage's strumming pattern so well it can often be mistaken for it, while Rivas' cello blends in with Blake's sax to create a perfect synthesis of chamber music and jazz. All along, the song grooves, but grooves in an Old World kind of way. Lage reveals himself to be a capable bandleader, assuming the lead soloist role but not overdoing it and letting the rest of band flourish in bringing out this strange but vaguely familiar sound.

For the pretty ballad “Margaret," Rivas again brings that little extra something that helps to set a song apart, giving it a classical levity but in a measured degree. Lage solos with real human patterns and expressions. Then again, he does that all over this record. In some spots, the individual performances take a back seat to the overall song: Blake's “However" blends African rhythms and American folk and Blake himself is mimicking the part of an Irish fiddle.

Their are no big guest stars on this album, but Lage mixes things up by breaking off the quintet into smaller pieces. “Iowa Taken" is a trio with Lage, Mantilla and Roeder, and it's a delight to hear how effectively the bassist and drummer respond to the guitarist, or how the role of leader and follower dynamically changes on this song.

Lage performs five pieces all by himself, which serves well in picking up the intricacies of his style. The little string bends or how the bass strings follows the lighter ones on the old folkie standard “Freight Train" is sublime. He plays just enough of “Autumn Leaves" straight to make it easily recognizable, but augments it creatively with both heavy strumming and the lightest plucking; it feels like a leftover track from Joe Pass' Virtuoso. For three other pieces, “Point The Way," “Cathedral," and “Listen Darkly," Lage plays in triplicate, multi-tracking himself in three part musical expressions of the Alexander Technique. These are short, largely improvisational pieces that are most impressive in how he “converses" with himself.

Released just yesterday, Gladwell handily beats the notorious sophomore jinx. The deft manner by which Lage is able to pull together so many disparate styles into a fluid, integrated style all his own and his intimate awareness of all these musical approaches already puts him in rare company alongside other outlaw jazz guitarists like Bill Frisell. We could use more guitarists who are less like anyone else. Like Julian Lage.