SOURCE: ALL ABOUT JAZZ
February 21, 2009
Sign in to view read count 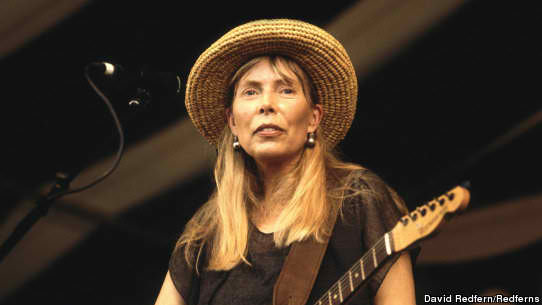 slideshow
With The Fiddle and the Drum, her collaboration with the Alberta Ballet, recently documented on DVD, Joni Mitchell is looking forward to spreading the piece worldwide.

“The whole thing in a certain way is out of my hands," Mitchell tells Billboard.com. “It's going to be featured at the (2010) Winter Olympics in Vancouver. We've had a request from Alabama, of all places, to play. It depends on money and a lot of things.

“My art dealer spoke to someone who runs a concert hall in New York, and they said they would take it there if I appeared. I don't know how much of that there would be, but I love going with the company. They're my kids at this point. It's just been such a delight working with these people."

Choreographed by Jean Grande-Maitre with Mitchell's full participation, The Fiddle and the Drum"blends together her music (including several songs from her latest album, 2007's “Shine"), dance and war-themed images from her latest visual art project, “Green Flag Song." It was first conceived as an autobiographical piece -- deemed “a little fluffy for the times" by Mitchell -- then a sort-form ballet before growing to a 48-minute production captured on the new DVD.

Most recently Mitchell and Grande-Maitre have expanded The Fiddle and the Drum yet again with four more songs, including her iconic “Woodstock." The full-length piece has already played in Saskatoon, rolls into Edmonton on Saturday [Feb. 21] and returns to Calgary on Feb. 26, which will be filmed for a hoped-for future DVD release.

The Fiddle and the Drum"\ remains the primary focus for Mitchell, who's also in the midst of treatments for Morgellons syndrome, an infectious and potentially debilitating skin condition that's put other endeavors on hold for now. “I think it's quite an interesting entertainment," she says of the ballet. “It acts like a play even though it's modular and non-linear, and people respond to it that way in the theater. It's such a joy for me. It's thrilling."