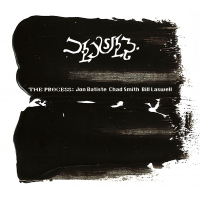 “I wanted to take a risk and be inspired by other musicians who feel the same. There was no music written before we got to the studio. Whatever comes into your head. Grab a rhythm and run with it.

Jon and I had an unspoken musical telepathy from the very first time we jammed at the church in Harlem. He's the main inspiration for me wanting to do this. Bill is kind of a mad scientist, his work speaks for itself... and it has been cool to see how he works.

This is very different from the Peppers. The basic recording and music was done in short 3-day sessions. Everyone was out of their musical comfort zones. That was Bill’s idea, and it was challenging not to fall back and go for what you know. I tried not to play grooves I've done before. I know Jon was stretching as well.

This project was an exercise in growth and trust." &#151Chad Smith, The Red Hot Chili Peppers

“This recording experience and meeting of musicians from fairly diverse backgrounds and histories began as an idea. The original idea was to film unfamiliar musicians playing together in a room with no preconceived direction. Over time it began to transform into making a record.

Here were Chad Smith, the versatile drummer for the Red Hot Chili Peppers, full of raw energy and surprises with a natural feel, rock solid time sense, and sense of humor; and Jon Batiste, a young virtuoso piano prodigy with a wide harmonic sensibility, great phrasing and a tight rhythmic flow. A son of New Orleans and the renowned Batiste family.