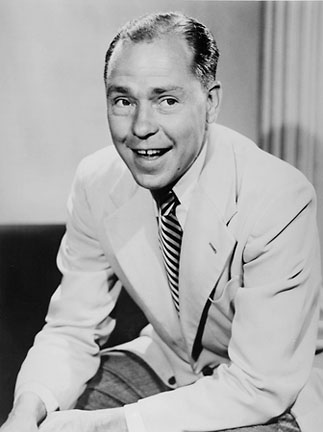 In-Depth, Music-Filled Portrait of Mercer to Premiere in November, Commemorating 100th Anniversary of His Birth

“Hooray for Hollywood"; “Jeepers Creepers"; “That Old Black Magic"; “On the Atchison, Topeka and the Santa Fe"; “Skylark"; “Blues in the Night"; “Moon River"; “The Days of Wine and Roses." Some of the most beloved songs of the 20th century came from the pen of a gap-toothed, Georgia-born lyricist, singer and composer named Johnny Mercer, whose solo and collaborative efforts have kept the world singing for more than eight decades.

This November, commemorating the 100th anniversary of his birth, Turner Classic Movies (TCM) will celebrate the extraordinary music of this legendary personality with JOHNNY MERCER: THE DREAM'S ON ME, executive-produced by Oscar-winning filmmaker Clint Eastwood. The 100-minute special, which premieres Wednesday, Nov. 4, at 8 p.m. (ET), features countless performances of Mercer's work and an abundance of new and archival interviews detailing his life and career. Produced by Rhapsody Productions in association with TCM, Arena/BBC and Warner Home Video and commissioned by the Johnny Mercer Foundation, the special is produced and directed by Bruce Ricker (Tony Bennett: The Music Never Ends).

TCM will complement the premiere of JOHNNY MERCER: THE DREAM'S ON ME with presentations of several classic films on which he worked every Wednesday night in November. Titles include Seven Brides for Seven Brothers (1954), Blues in the Night (1941), Hollywood Hotel (1937), The Harvey Girls (1946), Breakfast at Tiffany's (1961), The Days of Wine and Roses (1962), The Americanization of Emily (1964), Li'l Abner (1959) and The Belle of New York (1952). On Nov. 18, the anniversary of Mercer's birth, TCM will devote the entire day's schedule to his work.

The special also features rare interviews and performances by Mercer himself, including television appearances on The Merv Griffin Show and the BBC's Parkinson.

Admired and praised by the likes of Irving Berlin and Cole Porter, Johnny Mercer has been described as one of this country's greatest folk poets. Born and raised in Savannah, Ga., he grew up surrounded by the beauty of marshes, rivers and seacoast, and his lyrics often reflect the imagery of the natural world. They also echo the cadence and expressions of the African-American culture, the witty wordplay of William Gilbert and Noel Coward and the populism of Tin Pan Alley.

Mercer began his rise to fame as a singer/songwriter for legendary jazz conductor Paul Whiting. In 1935, he began working in Hollywood writing songs and occasionally appearing in small musical roles. Throughout his extraordinary career, he wrote songs for nearly 100 films, picking up four Oscars and 16 nominations. His more than 170 collaborators include Richard Whiting ("Hooray for Hollywood") Harry Warren ("Jeepers Creepers" and “On the Atchison, Topeka and the Santa Fe"); Hoagy Carmichael ("Lazybones" and “Skylark"); Jerome Kern ("I'm Old Fashioned"); Harold Arlen ("Ac-Cent-Tchu-Ate the Positive," “Blues in the Night," “That Old Black Magic" and “One For My Baby"); Henry Mancini (the Academy Award-winning songs “Moon River" and “The Days of Wine and Roses"); Johnny Mandel ("Emily"); and John Williams ("The Long Goodbye").

In addition to his musical creativity, Mercer co-founded Capitol Records in 1942. He persuaded a number of stars to record on the Capitol label, among them Jo Stafford, Peggy Lee, Nat King Cole, Stan Kenton and his former boss, Paul Whiteman.

For all his success as a writer, performer and record producer, Mercer had one great ambition left unfulfilled: a successful Broadway production. In 1946, he partnered with Arlen on St. Louis Woman. The show produced several hit songs, including “Any Place I Hang My Hat Is Home" and “Come Rain or Come Shine," but it was plagued with production problems and harsh criticism for its inadequate book. It would be 1956 before Mercer finally realized his dream of a hit Broadway show with L'il Abner.

Mercer passed away in 1976 in Los Angeles after suffering complications from surgery to remove a brain tumor. He is buried in his hometown of Savannah in the Bonaventure Cemetery, overlooking the Wilmington River, which served as the inspiration for his lyrics to the song “Moon River." He earned a posthumous Tony nomination in 1983, when Seven Brides for Seven Brothers became a Broadway musical. The Mercer House, which was built by his grandfather, later became the setting for the bestselling novel and subsequent Clint Eastwood-directed film Midnight in the Garden of Good and Evil.

Turner Classic Movies is a Peabody Award-winning network celebrating 15 years of presenting great films, uncut and commercial-free, from the largest film libraries in the world. Currently seen in more than 80 million homes, TCM features the insights of veteran primetime host Robert Osborne and weekend daytime host Ben Mankiewicz, plus interviews with a wide range of special guests. As the foremost authority in classic films, TCM offers critically acclaimed original documentaries and specials, along with regular programming events that include The Essentials, 31 Days of Oscar and Summer Under the Stars. TCM also produces a wide range of media about classic film, including books and DVDs, along with hosting a wealth of materials at its Web site, www.tcm.com. TCM is part of Turner Broadcasting System, Inc., a Time Warner company.

Turner Broadcasting System, Inc., a Time Warner company, creates and programs branded news, entertainment, animation and young adult media environments on television and other platforms for consumers around the world.