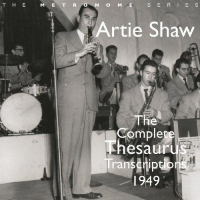 slideshow
By the late 1940s, most of the marquee big bands fronted by Swing Era bandleaders featured bebop arrangements. Bebop's popularity at the end of the decade owed a great deal to the increased influence of jazz disc jockeys, concert promoters and writers who championed the new music. Developed mid-decade by African-American musicians such as Charlie Parker, Dizzy Gillespie, Bud Powell, Kenny Clarke and Max Roach as well as a handful of white musicians including Stan Levey, Shelly Manne and Al Haig, bebop became the rage among urban intelligentsia who appreciated the energy of individualism and the art of improvisation.

In 1948 and '49, Artie Shaw, Tommy Dorsey, Harry James, Charlie Barnett, Benny Goodman, Buddy Rich and Woody Herman all formed aggressive bebop-flavored bands. Among these, Shaw's Thesaurus Transcription orchestra of 1949 was particularly noteworthy. Shaw took on complex arrangements with plenty of bop fireworks, thanks to the high caliber of the musicians in his band who could read them fluidly. Chief among the band's arrangers were Tadd Dameron (Fred's Delight, So Easy), Gene Roland (Aesop's Fables, Cool Daddy) and Johnny Mandel.

Johnny wrote three arrangements for this band—Innuendo, So In Love and Krazy Kat. The first was a proto-West Coast jazz chart that made fabulous use of cool-toned builds and harmony. The second was a pedestrian ballad with Pat Lockwood on vocal. The third is perhaps Johnny's most adventuresome. It's an exceedingly difficult arrangement that maximized the band's gifted musicians with Shaw's clarinet riding up on top.

What makes Krazy Kat so challenging is that it isn't a series of classic call-and-response sectional exchanges. Instead, sections of the band intermingle tightly like the fingers of two hands locking—playing off each other while the band swings and builds toward a rousing finale. And like most of Johnny's arrangements during the late 1940s and early '50s, this one doesn't circle back to repeat phrases. It's a flag-waver in the spirit of Tiny Kahn's arrangements. As you'll hear, Krazy Kat is relentlessly inventive and full of surprises at each stage.

A testament to the difficulty of this arrangement is that it was recorded only once—by this Shaw band. Here's what Johnny said about the '49 band when I interviewed him in 2008: “Wow, what a band. Artie said that this band was the best one he ever had." Indeed, though Shaw's '46 Musicraft band wasn't bad either. [Photo above of Johnny Mandel]