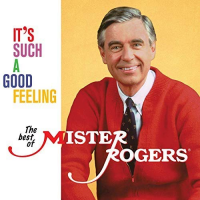 slideshow
On May 1, 1969, Fred Rogers was in Washington, D.C., testifying before the U.S. Senate Subcommittee on Communications. Rogers hosted Mister Rogers' Neighborhood, a children's show launched in Pittsburgh in 1968 on National Educational Television. He was in the hot seat trying to prevent a promised $20 million federal grant to PBS and the Corporation for Public Broadcasting from being slashed in half. President Nixon wanted to cut the grant in half to use the money to support the war in Vietnam.

As Rogers testified softly about the attributes of his show and why the full $20 million was needed for public television, the committee chairman, Sen. John Pastore (D/R.I.) politely listened.

The albums are a welcome respite from the news. As I wrote about Costa in 2018 (go here), the pianist was greatly influenced by Art Tatum and had a spirited, childlike quality about his playing. Johnny Costa Plays Mister Rogers is a sensational album. As you listen to it over and over, the melodies will enchant and overwhelm you. The music is a balm. I re-listened to it over and over from 1p.m. to 5 and again from 7 to 9, and I still could spend all day tomorrow listening to it. That's how good the album is.

It's Such a Good Feeling also is comforting. Virtually all of the show's songs were written by Rogers—the words and music. Though he was nerdy and shamelessly low-tech, Rogers was perhaps the greatest salesman for integrity and kindness. And in Johnny Costa's playing and arrangements, Rogers certainly heard something of himself.

JazzWax clips: Here's the upcoming trailer for A Beautiful Day in the Neighborhood, which centers on a character based on Esquire writer Tom Junod who traveled to Pittsburgh in 1998 to profile Rogers and wound up discovering himself.

Here's Tom's Esquire profile, which was a masterpiece when I read in back in 1998 and remains so now.

Here's the trailer to last year's excellent documentary on Fred Rogers, Won't You Be My Neighbor...

Here's Johnny Costa playing Won't You Be My Neighbor...

And here's Rogers introducing the musicians on the show...