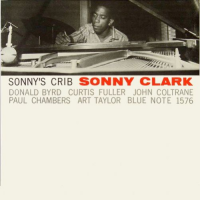 slideshow
John Coltrane recorded Speak Low only once in the studio, during Sonny Clark's Sonny's Crib album session for Blue Note on Sept. 1, 1957. What's notable about the recording session is that it took place 14 days before Coltrane's sole leadership date for Blue Note—Blue Train, an album widely regarding among his most important recordings.

The song opens with a four-bar Clark keyboard intro followed by Coltrane blowing the song straight for a chorus, accompanied by a light Latin feel by Taylor on drums. Coltrane then takes a second chorus to solo, combining his cascading “sheets of sound" with muscular improvised lines.

Fuller solos for a chorus on trombone featuring a punchy, powdery J.J. Johnson-like attack. Byrd follows with his aluminum-foil toned wanderings on trumpet. Clark wraps it up neatly with a graceful, frolicking melodic solo.

Evaluating the two takes of Speak Low to figure out why one was accepted and the other was rejected is a fascinating exercise. To my ears, it came down to Coltrane's transition from the second verse to the bridge ("Time is so old and love so brief"). On the alternate, he drops to the note while on the master he ascended, adding drama and exuberance. Give a listen and see if you can spot why one worked well and the other worked just a little less so.

And here's the alternate take...