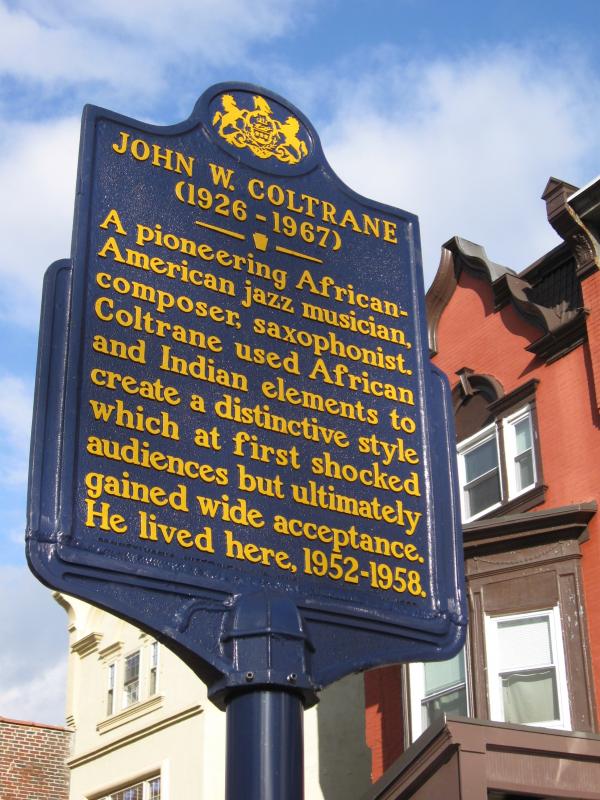 slideshow
The Preservation Alliance has been awarded a preservation planning grant from the Heritage Philadelphia Program of the Pew Center for Arts and Heritage to work with the owners of the John Coltrane House in North Philadelphia to plan a revitalization strategy for the 20th-century jazz great's former home, as well as an adjacent property.

Coltrane lived in the house from 1952 to 1958, during which time he overcame personal struggles with drug abuse and transformed his life to become an internationally influential jazz musician—a story that has the potential to inspire young audiences today.

The Preservation Alliance will coordinate an interactive and interdisciplinary process to design a program that also aids in the revitalization of the Coltrane House neighborhood. Working closely with community members, music scholars, musicians, educators, and preservation experts, the Alliance will host a series of focus groups to discuss potential ideas, leading up to a final charette. An online public forum will provide an opportunity for a national audience to show support for the house and potential programming. The Alliance will also produce an oral history with WHYY on Coltrane's time in Philadelphia and hold information and visioning sessions with residents and other stakeholders in the Strawberry Mansion neighborhood. In the coming weeks, All About Jazz will feature articles from the Hidden City Daily and other media outlets on the influence of Philadelphia's jazz culture on Coltrane and the lost jazz world he inhabited there, as well as on the efforts to reimagine the Coltrane house and the neighborhood.

The John Coltrane House is a recently formed federal non-profit organization. We are teachers, preservationists, historians, and musicians. Our mission is to preserve and restore John Coltrane’s National Historic Landmark home in Philadelphia and establish it as an open to the public historic house museum and center for Coltrane and jazz studies and related performance and programming activities. Coltrane's Philadelphia home is of the highest importance among the many worthy Coltrane memorials worldwide because Philadelphia is the most important locus of Coltrane’s development as a virtuoso musician.

Jazz scholars and critics uniformly agree that it was Philadelphia's rich and varied black jazz milieu in the 1940’s that nurtured and schooled the novice teen reed player just up from the South. They also agree that this tutelage was both indispensible to and inextricable from the remarkable saxophonist he became. At the time, the country’s most accomplished and innovative black jazz musicians met up, performed, and hung out in Philadelphia. Also, in Philadelphia Coltrane took advantage of the excellent training in traditional music available; he took saxophone lessons and studied music theory and composition. In his highly regarded biography of John Coltrane, music scholar Lewis Porter remarks, “Coltrane had unwittingly landed in the perfect place to develop his art” when he moved to Philadelphia from North Carolina in 1943.

In 1952, at the age of twenty-six, with the benefit of a G.I. loan, John Coltrane bought for himself, his mother, his aunt and his first cousin, the North 33 Street property. It was a big, beautiful house, built for a well-to-do middle class at the turn of the 19 century and a huge step up from the cramped quarters in a deteriorating area of town where the family had been living. Coltrane owned and lived in this home longer than any other during his legendary career as a jazz saxophonist and music composer. Also, it was during the years that he resided in the North 33 Street home that Coltrane, as a musician, became identifiably Coltrane.

When Coltrane left Philadelphia to further his career in New York City in 1958, the North 33 Street house anchored and provided continuity to his life. This remained so even after, as a prosperous established musician with celebrity status, he purchased a home on Long Island in 1964. Coltrane’s mother, Alice Blair Coltrane, remained in the Philadelphia home he had bought for the family during his lean early years as a rising jazz star until her death in 1977. Coltrane’s first cousin, Cousin Mary, then acquired and resided in the home until she sold it in 2004 with the request that it remain the tribute to John Coltrane that she had maintained during her years as owner by establishing the John Coltrane Cultural Society.

The John Coltrane House Inc. is pleased to continue and enlarge on the efforts of Mary Alexander. Our first task is to restore and preserve the physical structure of the House. Indispensable to that task, is to promote the crucial importance of the House to African American history, Philadelphia history, jazz history and jazz studies. We welcome and urge the support of Coltrane fans, jazz and serious music fans, arts aficionados, historic preservation enthusiasts, and arts, civic, and philanthropic organizations.