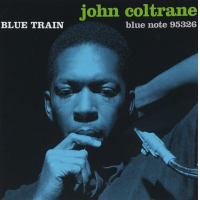 slideshow
If Blue Note Records producer Alfred Lion had regrets, topping the list would probably be chasing after his cat. In late 1956 or early '57, the dumb curiosity of the office feline would wind up killing what could have been the label's most lucrative catch—John Coltrane. More on this escapade in a moment. [Photo above of John Coltrane by Francis Wolff/Mosaic Images]

In all fairness, it's impossible to point to a single Coltrane album and claim it was his best. The work of artists of Coltrane's magnitude create a lifelong body of work that must be viewed as one long conversation with the fan and listener. If we view Coltrane's work this way, one of his most important musical dialogues was Blue Train.

The perfection of this album is hard to match. The flawless, sculptured lines catch the ear and take you on a journey. From the opening hunting call on Blue Train, to Coltrane's speed-bag attack on Moment's Notice, the propulsive blues of Locomotion and lyrical bop lines of Lazy Bird, Coltrane does more than craft solos. He is telling a multi-chapter story that is largely autobiographical. The songs capture his heritage, enthusiasm and desire to stand out and they forecast his goal of changing the role of his instrument and jazz itself, both of which he would eventually accomplish.

Blue Train was Coltrane's sole recording as a leader for Blue Note, which may be somewhat puzzling, since one senses he should have been recording there all along. How did the album come to be and why was there only one for the label? Producer Michael Cuscuna's liner notes for The Ultimate Blue Train issued on CD in 1997 sheds some light:

“In late 1956 or early 1957, John Coltrane went up to Blue Note's office [at 47 West 63rd St] to ask Alfred Lion for some Sidney Bechet albums (this was four years before he would pick up the soprano saxophone himself). He and Alfred talked about a record deal, but Francis Wolff, who handled the artist contracts, had gone for the day. Coltrane took his Bechet LPs and a small advance, saying that he would come back in a few days. He didn't and the whole incident seemed forgotten.

In early 1957, Coltrane signed with Prestige Records. But he'd remembered the discussion with Alfred and the advance and insisted on making an album for Blue Note to honor his commitment... Coltrane enjoyed the Blue Note luxury of paid rehearsals and wrote four brilliant tunes, all of which have become jazz standards."

But why didn't Lion at least propose a record deal? While he was the creative half of the team, he knew enough about an opportunity and how to swing a deal. The answer can be found in Richard Cook's Blue Note Records: The Biography (2003):

“The office meeting between Lion and Coltrane concluded in somewhat bizarre circumstances. Lion offered Coltrane a small advance for the making of at least one record, which Coltrane took and agreed to. Just as things were about to be even further formalized, the cat that resided in Blue Note's office leaped out of the window and into the street. Concerned for its welfare, Lion ran to the window, looked out and saw the animal being shepherded into a taxi by a woman who'd just opened the door of the cab.

“Alarmed that someone was trying to steal his cat, Lion ran down into the street and apparently managed to recover the animal. But on his return, Coltrane had disappeared. The contract remained as no more than a handshake agreement. [Months later], even though Coltrane had by then a new deal with Blue Note's great rival, Prestige, he didn't forget his promise. On Sept. 15, he led a top-drawer Blue Note line-up through five compositions at Rudy Van Gelder's studio in Hackensack, N.J."

Would jazz history have been different had Coltrane been a Blue Note artist? By 1957, Coltrane had helped Miles Davis meet his recording-contract obligation with Prestige before label owner Bob Weinstock would let Davis join Columbia. After Davis left the group, Coltrane played and recorded with Thelonious Monk in 1957—a seminal period that altered the sound of his horn and his approach.

During this busy period, Coltrane squeezed in his first Prestige leadership album in May 1957 (Coltrane), followed by Lush Life and an album with the Red Garland Trio in August. In September 1957, Coltrane backed pianist Sonny Clark on Sonny's Crib for Blue Note followed by Blue Train. A string of albums for Prestige followed, even after he re-joined Miles Davis in early 1958. As a Blue Note artist, Coltrane may have been prohibited by Lion and Wolff from playing, touring and recording with Davis, which would have kept him from the Kind of Blue recording session in 1959, limiting Coltrane's growth and the recording of his next important album, Giant Steps (1959), for Atlantic. So we're all better off that Coltrane remained with Prestige, which obviously gave him a flexible deal that allowed him to grow as an artist and as a Miles Davis collaborator.

Of course, it's just folly to predict what might have have been had Coltrane been locked into to an iron-clad Blue Note deal. But still, you have to wonder...