Joe Wilder to be Honored by Manhattan School of Music 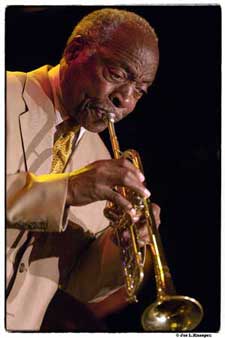 slideshow
Four Manhattan School of Music alumni are being honored at a special alumni homecoming reception on October 16, 2009. Joe Wilder, Capt. Kenneth Force, Elliot Goldenthal, and Laquita Mitchell will be recognized for their significant career accomplishments as well as for service to Manhattan School of Music. The Distinguished Alumni Awards Presentation, held in the School's Alan M. and Joan Taub Ades Performance Space, is part of the 2009 All-Alumni Reunion. Following the reception, there will be a performance by the Manhattan School of Music Symphony Orchestra with John Nelson conducting.

Joe Wilder (BM '53) was named a National Endowment for the Arts Jazz Master in 2008, having had a long career as a trumpet player with such artists as Louis Armstrong, Count Basie, Cab Calloway, Benny Carter, Dizzy Gillespie, Benny Goodman, Lionel Hampton, Billie

Wilder was one of the first African-Americans to play professionally in a Broadway pit orchestra for a 'white' show, premiering the scores of such shows as Silk Stockings and Guys and Dolls.

Wilder was a senior member of the Smithsonian Jazz Masterworks Orchestra and a staff musician at ABC studios for 17 years. He currently is a faculty member of The Juilliard School and teaches master classes across the U.S.

Capt. Kenneth Force (BM '64 / MM '65 / PD '70) is beginning his 38th year as Director of Music of the U.S. Merchant Marine Academy, having previously been an influential music teacher at the Port Chester High School in Westchester. His performance career included playing in the Radio City Music Hall Orchestra; on Broadway in such shows as My Fair Lady; and touring with the Ringling Brothers and Barnum and Bailey Circus Band. He is the author of the book British Band Concepts in America and is frequently called on to give clinics, write articles, and guest conduct ensembles throughout the U.S. and Europe. He has been honored with a lifetime achievement award from the Usdan Center for the Performing Arts and honorary membership in the prestigious American Bandmasters Association (one of only eight individuals to hold that distinction).

In May 2004, he was presented with the Medal of Honor from the Daughters of the American Revolution for his dedicated service to the arts and historic preservation, as well as for his patriotism.' Capt. Force is a member of the Manhattan School of Music Alumni Council.

Elliot Goldenthal (BM '77 / MM '79) has written works for orchestra, theatre, opera, ballet and film. His numerous awards include an Academy Award, a Golden Globe, numerous ASCAP Awards, and two Grammys, as well as numerous nominations, for such film scores as Frida, A Time To Kill, Batman Forever, and Across the Universe. The Green Bird and the Tony-Award winning carnival mass Juan Darie'n are two of the composer's theater works. For the concert stage, he wrote Fire Water Paper, a commission for the 20th anniversary of the Vietnam War, which premiered with Yo-Yo Ma as soloist. American Ballet Theatre commissioned his ballet score of Othello, which was co-produced in partnership with the San Francisco Ballet and the Lar Lubovitch Dance Company. His three-act opera, Grendel, had its world premiere in 2006 at the Los Angeles Opera, and was subsequently performed at the Lincoln Center. He was named one of the two finalists for the 2006 Pulitzer Prize in music for his work on Grendel. His current projects include scores to Julie Taymor's The Tempest, another in a series of Shakespeare-on-film collaborations with director, and Michael Mann's film, Public Enemies.

The 2009 Outstanding Young Alumni Award will be given to soprano Laquita Mitchell (MM '01 / PS '02). Laquita has recently finished a successful engagement as Bess in San Francisco Opera's production of Porgy and Bess. Her other house debuts include Cincinnati Opera, Houston Grand Opera, Lyric Opera of Chicago, Los Angeles Opera,

Previous recipients of the Distinguished Alumni Award from Manhattan School of Music include:

The Manhattan School of Music is located on the northwest corner of Broadway at 122nd St, part of New York City's Morningside Heights neighborhood.