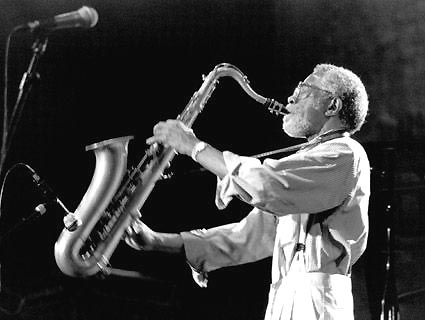 slideshow
Grammy-Winning Saxophonist and jazz legend Joe Henderson had a long and memorable history with SFJAZZ in San Francisco performing over a dozen times in various settings including a duet with tabla great Zakir Hussain at Grace Cathedral, a salute to Antônio Carlos Jobim with Herbie Hancock, and a 1993 tribute night entitled “We Love Joe” featuring his quintet with John Scofield, Charlie Haden and Al Foster, his Big Band, and the Kronos Quartet. On Thursday, August 14, SFJAZZ formally dedicates the Center's Joe Henderson Lab, named for the iconic saxophonist, with a week of performances that pay tribute to four of his greatest recorded moments.

On Thursday, saxophone great and Joe Henderson collaborator Mel Martin presents the music of Henderson’s 1963 debut, Page One, a landmark session and a remarkably self- assured first statement as a bandleader. Page One boasts an impressive band made up of trumpeter Kenny Dorham, pianist McCoy Tyner, bassist Butch Warren and drummer Pete LaRoca, and contains a pair of tunes that have become timeless standards in the jazz repertoire and songs forever associated with Henderson, Dorham’s “Blue Bossa” and Henderson’s own bossa-tinged classic, “Recorda Me.”

Friday night focuses on the hugely influential 1967 Blue Note debut by pianist McCoy Tyner, The Real McCoy, performed by former Bay Area pianist Matt Clark and a terrific band. Having left saxophonist John Coltrane’s epochal quartet two years before, Tyner formed a new band for The Real McCoy, which included Henderson along with bassist Ron Carter and drummer Elvin Jones. Marked by its longer, exploratory material including the signature Tyner compositions “Passion Dance,” “Contemplation” and “Blues on the Corner,” The Real McCoy is a prominent feature for Henderson as a peerless soloist and ensemble player.

Called one of the “17 Essential Hard Bop Recordings” by the All Music Guide, Horace Silver’s immortal 1964 Blue Note release, Song for My Father, is the pianist’s defining album and among the greatest jazz recordings of all time. Anchored by Silver’s signature title tune, Song for My Father has as its centerpiece the knotty and virtuosic Henderson composition “The Kicker,” which has come to be regarded as a jazz standard and a potent demonstration of Henderson’s formidable skill as a composer. At the heart of Song for My Father is Henderson, who shared the front line with trumpeter Carmell Jones, backed by a rhythm section including Silver, bassist Teddy Smith and drummer Roger Humphries. For this third night of the Joe Henderson Hotplate Festival, pianist and San Francisco native Adam Shulman and his group will perform Song for My Father in its entirety.

Founded in 1983, SFJAZZ presents the greatest names in jazz, Latin and global music and nurtures the art of improvisation through its year-round concert, commissioning and education programs. The West Coast’s biggest jazz presenter serves over 200,000 fans and students every year and has several award-winning resident jazz ensembles - the world renowned SFJAZZ Collective and the SFJAZZ High School All-Stars.

After 30 years of using rented halls, SFJAZZ finally has a home in the vibrant performing arts district of San Francisco. The luminous new SFJAZZ Center opened in January of 2013 and is the only stand-alone facility built specifically for jazz in the United States. Designed by San Francisco architect Mark Cavagnero, the LEED-Gold certified center offers the superb acoustics of a great concert hall and the relaxed intimacy of a jazz club.