Joe Chambers' Outlaw Band at Smoke May 11th and 12th 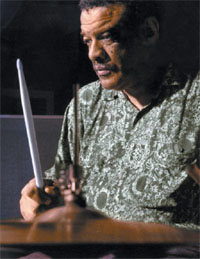 A member of the '60s fraternity that recorded some of Blue Note's greatest music, Joe Chambers can lay claim to a place alongside such innovative artists as Freddie Hubbard, Wayne Shorter, McCoy Tyner, Herbie Hancock and Bobby Hutcherson.

In D.C., Chambers worked the famous Bohemian Caverns. Working in the Caverns, Joe had the opportunity to meet outstanding artists who performed in the area, and was urged to come to New York by Eric Dolphy, Freddie Hubbard and Wayne Shorter.

Arriving in New York in 1963, he performed and recorded with several of the more progressively inclined musicians associated with the Blue Note label. Some of Chambers' recording credits include: Freddie Hubbard's “Breaking Point"; Bobby Hutcherson's “Components," “Total Eclipse" and “Happenings"; Wayne Shorter's “ Adam's Apple," “Etcetera" and “The All Seeing Eye"; McCoy Tyner's “Tender Moments"; Charles Mingus' “Like a Bird"; and Chick Corea's “Tones for Jonas Bones." In 1970, Chambers joined Max Roach's percussion ensemble, M'Boom as an original member. Touring and recording throughout the 70's, M'Boom also released three albums, for Columbia, with Chambers contributing as featured composer and arranger.