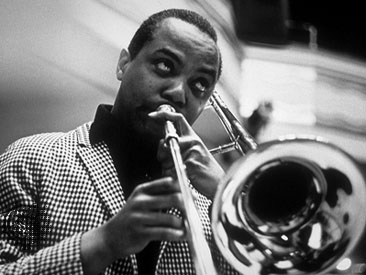 slideshow
Tropical storm Isaias blew into New York around 11 a.m. yesterday, whipped things around and split at about 3 p.m. When it did, the sun came out and the 35-mph gusts began, cooling things off a bit. For some reason, I craved J.J. Johnson and his distinct, muffled trombone sound.

The albums I turned to were the three he made with the Belgian woodwind player Bobby Jaspar. On J Is for Jazz (1956), Dial J.J. 5 (1957) and Live at the Cafe Bohemia: Jay Jay Johnson Quintet (1957), Jaspar played tenor saxophone and flute. The two of them were magic together.

The sessions for Columbia were among the first by Jaspar after he arrived in the U.S. in May '56 hoping to make a name for himself. Jaspar was already known from the recordings he made with American jazz players in Paris. He also had married singer-pianist and arranger Blossom Dearie in 1954, so her return home to New York in 1956 to begin recording for Verve surely had something to do with Jaspar's arrival here that year, too. The pair divorced the following year.

Dial J.J. 5 included J.J. Johnson (tb), Bobby Jaspar (ts,fl), Tommy Flanagan (p), Wilbur Little (b) and Elvin Jones (d). The selections were mostly bebop tunes, including Barbados,  Tea Pot and Bird Song. An interesting contrast between the two approaches by Jaspar on this album and the last one.

For me, Jaspar and Johnson were most interesting when blowing cool on their first album together. Jaspar had long, relaxed lines and a Pacific Coast sensibility, likely picked up from listening to West Coast recordings in Paris. Johnson remains a personal favorite, for his lyrical sensibility and the powerful, powdery attack of his horn. Together, they were a perfect match. My only wish on these three albums is that, in places, they chose songs that better displayed their sound together.

JazzWax clips: Here's Angel Eyes from J Is for Jazz...

And here's I Should Care from Live at the Cafe Bohemia...