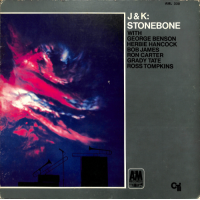 In 1967, Creed Taylor launched CTI Records as a subsidiary of the A&M label. Creed had just left Verve, where he headed the jazz label and pioneered new concepts in young-adult jazz, including covers with abstract color photography and jazz interpretations of pop-rock and pop-soul radio hits. In New York, Creed had complete autonomy over CTI. Herb Alpert and Jerry Moss were busy in Los Angeles, and they envisioned CTI as a hip, easy-jazz imprint. In 1969, Creed struck a deal with A&M to leave the label and take CTI with him. At the time, A&M was pushing into rock and expanding its pop catalog. They had no problem letting Creed and CTI go, since they had bigger fish to fry, including the Carpenters.

One of the last albums recorded on the CTI label while still under the A&M umbrella was J&K/Stonebone, by J.J. Johnson and Kai Winding. The album's four songs were recorded over three days in September 1969. But J&K/Stonebone was never released in the U.S. and remains one of CTI's rarest releases. It was released only in Japan in 1970. When I asked Creed about the album months ago, he couldn't recall it, despite his name and large signature being stamped on the cover as producer.

So why wasn't the hypnotic album released in the U.S.? My guess rests with three different reasons or all of them combined. First, there were only four tracks on the album, two per side. From a sales perspective, four songs told the target buyer in 1969 that the music on the album was long-winded. Second, the shortest track on the album runs just over four minutes, which means there wasn't a radio single, a big shortcoming in 1969. Third, each side runs just 18 minutes, which would leave buyers feeling shortchanged at new-album prices levels then.

So what happened? Given how many basic rules of Creed's own producer playbook the album violated, here are my guesses:

Now that we have a rough sense of the possible reasons the album wasn't released in the U.S., why was it put out only briefly by King Records in Japan?

The upshot is the album is a superb jazz-psychedelic release. The trombones function almost like electric guitars while Bension and the keyboards give the album a jam session feel. There's a hypnotic quality to J&K/Stonebone and it certainly deserves to be re-issued, at least digitally. The only way to listen to this album is to hear it over and over again in one sitting. [Photo above of Creed Taylor]