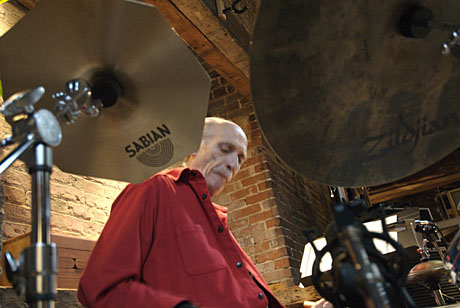 slideshow
“Let go of what you want it to be. let go of how you think it too should be. even let go of your vision.and so we began by bringing in compositions and tearing them apart to find out what worked. This recording is a crystallization of that process.”

In the middle of 2011, after releasing the first ever solo recording of his extensive career (2010’s 1313 on Divorce Records), critically acclaimed drummer Jerry Granelli opted to explore the trio format with the release of Let Go, working with a new group featuring bassist Simon Fisk and saxophonist Danny Oore.

After almost a year of tearing the music apart and pulling it back together; communications over long distances and intimate rehearsals; playing the pieces live and hidden away in Jerry’s studio—the trio and the music were ready. Although the project was always about letting go, the CD’s title actually came later. Before that could happen, everyone had to pack away any preconceptions and allow the power of the music and the trio, as a living-breathing unit, to guide the sessions.

It’s certainly not as if Granelli was unused to working in a trio format; he cut his teeth on some of the best trios in the business, including Vince Guaraldi, Denny Zeitlin and Mose Allison. And while he has led and directed small and large ensembles over the years, Let Go marked the first time that he has stepped up to lead his own trio.

Granelli has known Danny Oore and Simon Fisk for years. When he began to think about the trio format for his next project, it was their artistry and their sound that seemed to fit what he imagined, as he’d been toying with the concept of using the structure of the trio without it sounding like a trio. The result of the younger players’ collaboration with the 72 year-old Granelli – Fisk on bass and cello and Oore on tenor, soprano and baritone saxophones - brought an entirely new range of colors to the trio palette. The result is effortless and multi layered. There is also one very clear anomaly. After meeting the celebrated Celtic vocalist Mary Jane Lamond a few years ago, Granelli continued to be haunted by the sound of her singing in Gaelic. “Mary Jane is a fearless artist who can transcend style and has a real connection to improvising,” says Granelli, who knew she had to play some part in his new recording. He reached out to Lamond, who of course acquiesced; her remarkable vocals are featured on two tracks on Let Go, “Vulnerable” and “Solaria.” Jazz Times magazine calls Granelli “one of those uncategorizable veteran percussionists who’s done it all.” And, as his recent pair of recordings proves, Granelli burns with an intensity fueled by a passion for “the pursuit of the spirit of spontaneity which drives the player.”

Jerry Granelli’s story is one that follows the evolution of the San Francisco Hard Bop jazz scene. Born in 1940 in San Francisco, Granelli recognized his passion at only 8 years of age, when he spent a day with Gene Krupa. Hanging out during the 50s in San Francisco nightclubs like the Blackhawk, The Jazz Workshop and Jimbo’s Bop City gave him a direct connection to what was happening in New York City. Soaking in the sounds of Miles, Max Roach, Philly Joe Jones, Elvin Jones and Monk, his passion grew, eventually leading him to Dave Brubeck drummer Joe Morello. After two years as Morello’s star pupil, Granelli became a highly sought-after session player, eventually playing, recording and touring with the Vince Guaraldi Band, becoming best known for his the unmistakable steady swing beats on the classic Charlie Brown “Peanuts” theme song. Forty five years ago, Jerry Granelli was already peaking as a commercially successful Jazz drummer as a result of his work with Guaraldi.

It was shortly after that success that Jerry took a hard turn left into the world of improvisation and musical exploration. He has never looked back. In the volatile West Coast scene of the 60s, Granelli moved on to the Denny Zeitlin Trio, a group that also included bassist Charlie Haden. A hugely successful recording and touring band, they tied with Miles Davis for Group of the Year in Downbeat magazine’s Critics and Readers Poll in 1965. Throughout the 60s he performed with many major players on the scene, including Jimmy Witherspoon, Mose Allison, Lou Rawls, John Handy, Sonny Stitt, Sly Stone, Ornette Coleman and Dewey Redman. He was right there, too, as jazz styles began to swing towards the beginnings of psychedelia. His free-form improvisational trio held down the opening slot for comedian Lenny Bruce for three months in 1963, and he shared bills at The Matrix and The Fillmore with Jefferson Airplane, Big Brother and the Holding Company and the Grateful Dead, accompanying the Dead on their first European tour in 1971.

Granelli became a Buddhist in 1970, and from the mid-70s through the 90s he focused on teaching, bringing his insider knowledge to hundreds of students at the Naropa Institute in Boulder, then Seattle’s Cornish Institute, the Conservatory in Halifax, and the Hochschule der Kunst in Berlin.

In the early 90s Jerry moved to Halifax and immediately became a keystone in the jazz community. Along with Halifax’s Jazz East organization he founded the Creative Music Workshop a two-week intensive music program that takes place every summer in conjunction with the Atlantic Jazz Festival. Despite all his accomplishments, until asked by Divorce Records, Granelli had yet to make a solo drum record. It seems fitting that after a life behind the kit, Jerry finally should go it alone. No one, including the drummer himself, knew what to expect, but the results are remarkable. All the tracks on 1313 except one were played with no overdubs, and most were done in a single take. 1313 is dark, masterful, and bravely unique — an outstanding new exploration of percussion and sound by a man who has been challenging himself musically for 60+ years.

Not widely released in the US until now, Let Go once again finds the peripatetic Granelli heading off in a new direction, nurturing a new sound and a new partnership in music. As musically vibrant and vital at 72 as he was at 22, with Let Go, Granelli has again proved himself to be an inspiring, creative risk taker.