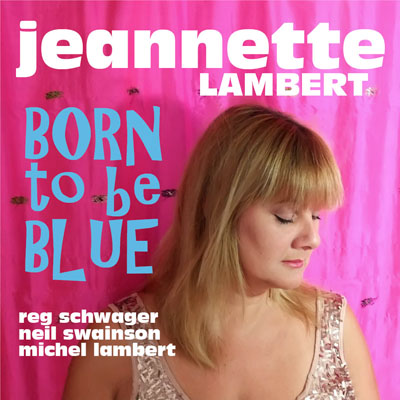 slideshow
MONTREAL, QC (CANADA)—On May 5th, 2011, Jazz From Rant will release Montreal jazz vocalist Jeannette Lambert's 9th recording as a leader, Born to be Blue (rant 1141), featuring her longtime collaborators, her brother guitarist Reg Schwager, her husband drummer Michel Lambert and bassist Neil Swainson. The recording features a return to the jazz standards Jeannette and Reg began performing when they were teenagers, with many of the selections recorded now for the first time.

Drawing on her background singing and writing poetry, it is fitting that Jeannette selected songs with timeless and evocative lyrics. The title track, Born to Be Blue, is a nod to the classic version with Helen Merrill and Clifford Brown, one of the musicians she heard most around the house while growing up. Ne Me Quitte Pas is one of her favourite songs by Jacques Brel, and the English lyrics were chosen from the newest translation of this classic. Once Upon A Summertime is a sweeping, cinematic song written by Michel Legrand, titled La Valse Des Lilas in French and performed in the past by both Chet Baker and Blossom Dearie. You Go To My Head, performed here by Jeannette for the first time, was a request from Jeannette and Reg's father Walter, who's astute talent for repertoire has him poised to produce their next album.

Born to Dutch-Indonesian parents, and raised in Sudbury in Northern Ontario, Canada, Ms. Lambert began singing professionally in coffee shops at the age of 12, accompanied by her brother Reg on guitar. Later, in Toronto, she was mentored by veterans of the Montreal jazz scene, including trumpeter Herbie Spanier, and many of the visiting jazz artists of the time who encourage her to sing at jam sessions. After a year in Spain she was also influenced by the diverse vocal traditions of flamenco, and Portugese fado. She further refined her musical style studying with vocalist Jay Clayton, the legendary Cecil Taylor and others at the Banff Jazz Workshop.

Geoff Chapman of the Toronto Star wrote that “unadorned elegance" is the keynote of Jeannette Lambert's singing" and she is included as one of the best jazz vocalists of all time by author Scott Yanow in his book, The Jazz Singers: the Ultimate Guide. Her previous recordings include Sand Underfoot with pianist Paul Bley, bassist Barre Phillips and Michel Lambert, which was described as “a jewel" in the All-Music Guide, and Lone Jack Pine, described as “art at a very high level“ in Cadence Magazine. She has performed around the world, written lyrics for music recorded by a number of other jazz vocalists, and recently returned from Bali where the group performed a series of concerts and workshops.

The recording is the first mp3 album release by the Jazz from Rant label, signalling a move to more streamlined distribution channels. It is available at ITunes, CDBaby, Amazon and many other digital music outlets.