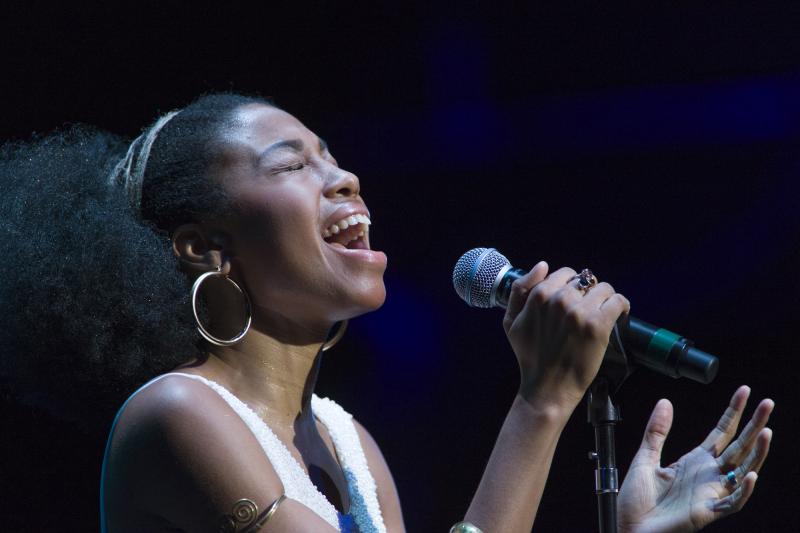 Ms. Horn won the SASSY AWARD, a $5,000 prize, with a rendition of “East of the Sun” that brought the crowd to its feet in appreciation of her vocal fireworks. First runner-up Barbra Lica of Toronto, Ontario won $1,500 for her version of “Honeysuckle Rose” that would be right at home in a 1950s night club, and second runner-up Camille Thurman of New York won $500 with her scat-filled take on the standard “Bye Bye Blackbird.” Kate Davis of Portland, OR won The Sarah Vaughan International Jazz Vocal Competition Rising Star Award. The other finalists were Teira Church of Los Angeles, CA and Lydia Harrell of Boston, MA. The competition – presented by JAZZ ROOTS, WBGO JAZZ 88.3 FM and the New Jersey Performing Arts Center – was produced by award-winning producer Larry Rosen and powered by Indaba Music (IndabaMusic.com), the leading online community of musicians and marketplace for music opportunities.

”We are helping to launch careers for the most exciting female jazz vocalists of tomorrow, while spreading the Sarah legacy to a new generation of music fans’’, said producer Larry Rosen, “Cyrille Aimée, our 2012 SASSY winner, and Jazzmeia Horn represent the future of where jazz is headed.”

Also performing during the finals was Ms. Davis, the outstanding young artist chosen for the The Sarah Vaughan International Jazz Vocal Competition Rising Star Award. The award created for the purpose of discovering young talented jazz vocal artists that deserve wider recognition and mentoring in their career as a jazz singer, while keeping in the tradition of Sarah Vaughan. Davis is a recipient of four Downbeat Magazine Student Music Awards, a double invitee to the Brubeck Summer Jazz Colony, and bassist in the Grammy Jazz Ensemble. In 2009, she was selected as a Presidential Scholar of the Arts. Kate is a graduate of the Manhattan School of Music.

A distinguished panel of musicians, music industry executives, members of the Jazz Education Network (JEN), NJPAC leadership and online voters culled through submissions from around the globe to narrow the field to the five finalists and Ms. Davis. Contestants were judged on vocal quality, musicality, technique, performance, individuality, artistic interpretation and ability to swing. Online voters listened to songs submitted to the contest over 100,000 times.

Sarah Vaughan is known around the world as the songstress who transformed America’s original art form, elevated the craft of jazz vocal music and garnered the respect and adoration of millions. But once upon a time, she was just another high school student, walking the halls of Arts High School in Newark, NJ.

In tribute Vaughan, once a high school student walking the halls of Arts High School in Newark, NJ, the New Jersey Performing Arts Center will continue the Sarah Vaughan Vocal Scholarship Residency, a six- week program to take place this spring at Arts High School. “Sarah Vaughan Vocal Scholars” were chosen from among Arts High vocal students to participate in a 12-session residency, where they will conduct an in-depth study of Vaughan's unique talent, style and legacy. Participating students will study vocal technique and interpretation as well as song styling and piano. The residency will also include and exploration of jazz history through listening, video, lecture, and special guests.

The competition was the culminating event in the TD James Moody Democracy of Jazz Festival, a celebration of jazz and the musical legacy of longtime Newarker and beloved jazz saxophonist and composer James Moody. Presented by NJPAC and WBGO Jazz88.3FM, the Moody Festival ran from Nov. 4-10 at NJPAC and in other venues around the region.

The Sarah Vaughan International Jazz Vocal Competition was presented as part of NJPAC’s JAZZ ROOTS series with producer Larry Rosen. The TD James Moody Democracy of Jazz Festival’s title sponsor is TD Bank - America’s Most Convenient Bank®. It is sponsored, in part, by The Prudential Foundation, The PSEG Foundation, Audible.com, JAZZ ROOTS and Jazz Education Network (JEN). This performance is also made possible in part by the New Jersey State Council on the Arts and by Discover Jersey Arts.

New Jersey Performing Arts Center (NJPAC), located in downtown Newark, New Jersey, is among the largest performing arts centers in the United States and is the artistic, cultural, educational and civic center of New Jersey — where great performances and events enhance and transform lives every day. As New Jersey’s Town Square, NJPAC brings diverse communities together, providing access to all and showcasing the State’s and the world’s best artists while acting as a leading catalyst in the revitalization of its home city. Through its extensive Arts Education programs, NJPAC is shaping the next generation of artists and arts enthusiasts. NJPAC has attracted over 6 million visitors (more than one million children) since opening its doors in 1997, and nurtures meaningful and lasting relationships with each of its constituents. Visit www.njpac.org or call 1-888-GO-NJPAC for more information.

Founded in 1979, WBGO (Newark Public Radio, Inc.) is a publicly supported cultural institution that champions jazz at WBGO 88.3 FM in Newark, New Jersey and worldwide via WBGO.org. WBGO is the recognized world leader in jazz radio and one of the most respected jazz presenters in the country, and offers award-winning news and innovative children’s programs. Beyond reaching 350,000 weekly listeners (including 17,000 contributing members) on air, online and via mobile devices, WBGO presents live broadcasts from prestigious jazz venues and produces acclaimed programs for NPR heard by millions.

TD Bank, America's Most Convenient Bank, is one of the 10 largest banks in the U.S., providing more than 8 million customers with a full range of retail, small business and commercial banking products and services at approximately 1,300 convenient locations throughout the Northeast, Mid-Atlantic, Metro D.C., the Carolinas and Florida. In addition, TD Bank and its subsidiaries offer customized private banking and wealth management services through TD Wealth®, and vehicle financing and dealer commercial services through TD Auto Finance. TD Bank is headquartered in Cherry Hill, N.J.

Indaba Music is an online home to over 800,000 musicians. The Indaba community collaborates with some of the biggest artists and brands in the world to create incredible new music and engage millions of consumers across the web. Indaba was founded in 2005 to be an online home where musicians can make friends, get feedback and inspiration from other musicians, build their musical resume, and advance their musical aspirations by participating in our contests and opportunities. To date, Indaba Music contests have featured artists and brands including Daft Punk, Red Bull, Snoop Dogg, Peter Gabriel, Linkin Park, Yo-Yo Ma, Paul Simon, Foster The People, Bacardi and Usher. Indaba also operates Indaba Sync, a portal for licensing the best emerging content from the Indaba Music community.

The Jazz Education Network (JEN) is dedicated to building the jazz arts community by advancing education, promoting performance, and developing new audiences. With a home base in the United States and members in more than 20 countries, this thriving organization hosts a popular annual conference that serves teachers, students, artists, performing arts presenters, music industry partners, and more. It runs ongoing programs of scholarships for students and educators, student composition showcases, community outreach, music and instrument donations to schools in need, and mentoring between jazz pros and students.