SOURCE: ALL ABOUT JAZZ
September 11, 2007
Sign in to view read count 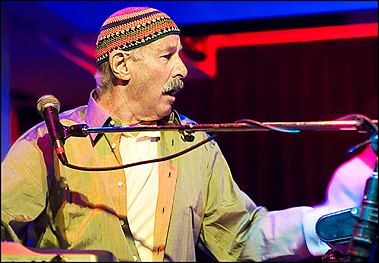 slideshow
Vienna, Sept 11 - Joe Zawinul, one of the greatest modern jazzmen, pioneer of 'fusion', the merger of his music and rock, has died of cancer at the age of 75. His son Erich announced his death. He died in a hospital in Vienna, where he was born. Composer, pianist and organist considered to be “ revolutionary", one of the first to understand the importance of the keyboard for the evolution of his genre, Zawinul has meant much for modern music: from his collaboration with Miles Davis with whom he made the legendary albums Bitches Brew and In a Silent Way, to his very successful solo career. In 1971 he founded the legendary jazz-rock group the Weather Report with saxophonist Wayne Shorter, Miroslav Vitous on contrabass, Alphonse Mouzon on drums and Airto Moreira on percussions.

Their albums were to become real milestones: from Weather Report to I Sing the Body Electric and Mysterious Traveller. Other instrumentalists would join Zawinul and Shorter later, like basist Jaco Pastorious, with whom they made masterpieces like Black Market, Heavy Weather and Birdland. “Joe Zawinul was born on July 7, 1932 earth time, but on September 11, 2007 for the eternity", his son noted.