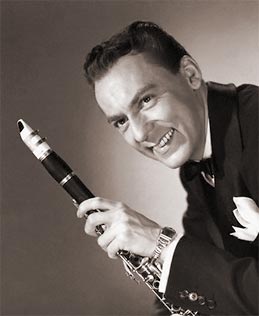 Woody Herman was one of the most famous big band leaders from the 1940's swing era who managed to make the transition through various big band jazz music eras including bebop in the late 1940's, rock oriented jazz in the late 1960's and 1970s, and into the 1980s after a resurgence in contemporary big band jazz.

Jazzed Media, a jazz record label and film production company, was founded in the Denver, Colorado metropolitan area in 2002. Jazzed Media's owner Graham Carter is a multi-Grammy nominated record producer (The Bill Holman Band Live and The Bill Holman Band Hommage) and award winning jazz filmmaker (Phil Woods A Life in E Flat and Bud Shank Against the Tide). Carter produced the Jazzed Media production Phil Woods A Life in E Flat and produced and directed the Bud Shank documentary Against the Tide. Graham Carter also produced and directed the forthcoming Stan Kenton documentary Artistry in Rhythm that will be released in early 2011.