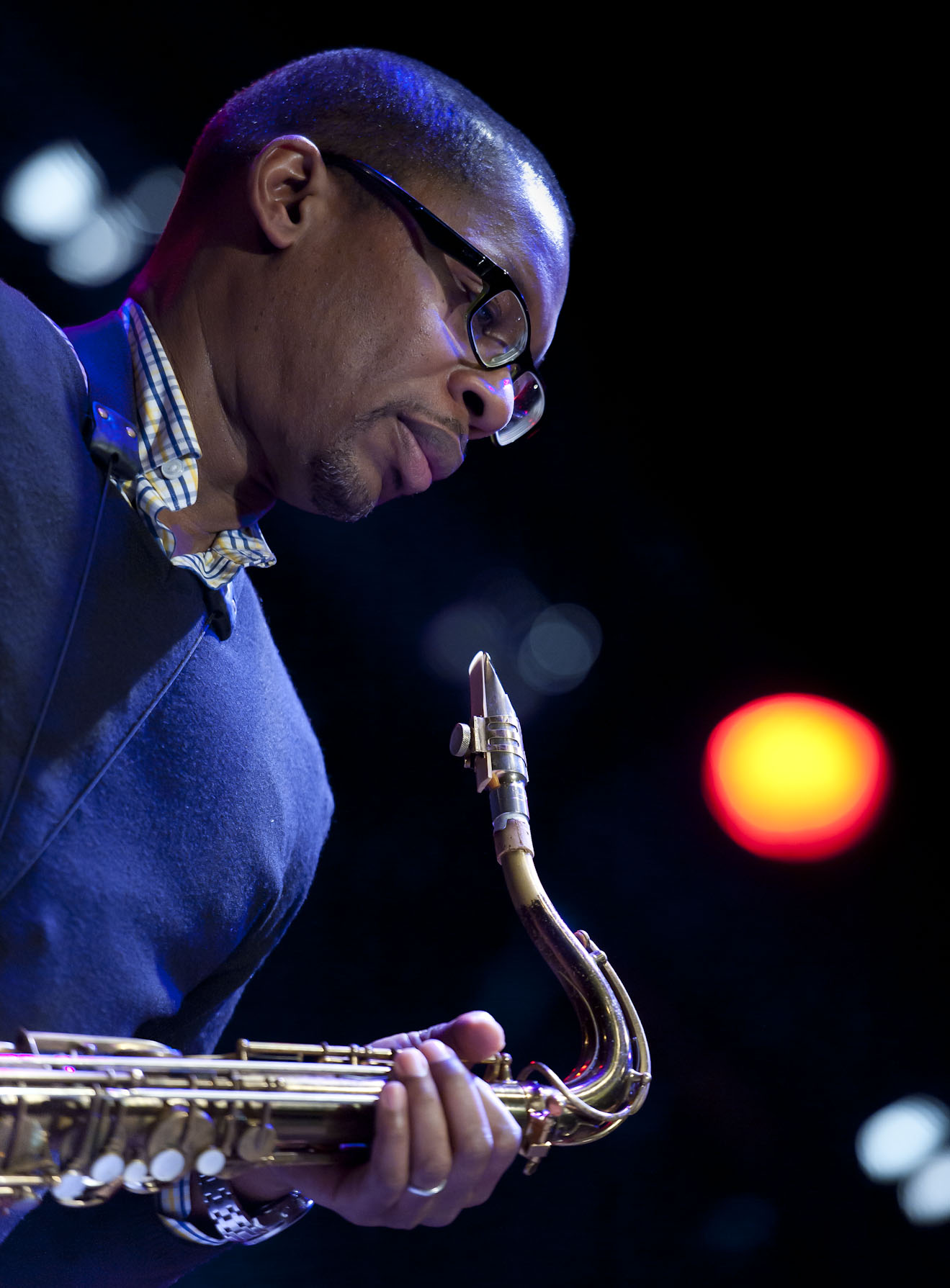 slideshow
The tenor sax plays a major role in this week's schedule of jazz and creative music in St. Louis, with two of the instrument's most prominent current exponents in town, plus several other noteworthy shows including the debut of a new big band as well. Let's go to the highlights...

Tonight, saxophonist Ravi Coltrane (pictured) opens a four-night engagement continuing through Saturday at Jazz at the Bistro. Coltrane, the son of legendary saxophonist John Coltrane and pianist/harpist Alice Coltrane, last played the Bistro with his own group in 2008, and then returned the following year to perform with the Blue Note 7 at the Sheldon. He's been through some changes since then, and talked about them a bit in an interview I did with him on Monday that should be going live on the Riverfront Times music blog any time now.

Until then, for more about Ravi Coltrane, check out this video showcase post from a couple of Saturdays ago; this St. Louis magazine blog post by Dennis Owsley, which compares Coltrane with his famous father; and this article by the Post-Dispatch's Calvin Wilson, which ponders the elder Coltrane's influence on his son and on Branford Marsalis (who will be here on Sunday—see below). Also, you can hear Coltrane's complete set from last summer's Newport Jazz Festival as archived online by NPR here.

Also tonight, Erin Bode is at Cyrano's; saxophonist Larry Johnson and singer Charlie B. will be playing their new weekly gig at Bartolino's near Hampton and 44; and singer Ralph Butler and pianist Gigi Darr perform in an early evening show at Jazz on Broadway in Alton.

On Thursday, Coltrane will be at Webster University's Community Music School to do a workshop with Webster students; the event, held in CMS room #10, also is open to the public, free of charge. Also on Thursday, the Dixie Dudes bring their traditional New Orleans jazz sound back to Jazz on Broadway.

Then on Friday, trumpeter Randy Holmes' quintet (aka Hard Bop Heritage) will play at Robbie's House of Jazz; saxophonist Rod Tate returns to the Halls Ferry Inn Jazz Cafe; and drummer Paul Shaw's trio with pianist Ptah Williams and bassist Bob DeBoo is back at the Cigar Inn.

Saturday evening, the Funky Butt Brass Band will perform at the new multi-genre venue Plush, which is located at 3222 Locust in Midtown. (For a bit more about this venue, which seems to be booking mostly rock, blues and R&B so far, see this blog post from the RFT's Kiernan Maletsky.)

On Sunday, saxophonist Branford Marsalis and pianist Joey Calderazzo will be in St. Louis to perform as a duo at the Sheldon Concert Hall. Both were here last for a Marsalis quartet show at the Touhill in February 2010, but this tour is a follow-up to the duo album Tales of Mirth and Melancholy released last year by Marsalis and Calderazzo. For more about that, see this video showcase post from last Saturday.

Also on Sunday, trombonist Dave Dickey, a veteran musician but relatively recent transplant to the area who's played with a host of name jazz and Latin artists, debuts the new St. Louis version of his Big Band at the Kirkwood Station Brewing Company; and the Webster Groves middle and high school jazz bands will perform their annual “Cool Nights, Hot Jazz" concert over at The Pageant.

Looking beyond the weekend, on Monday saxophonist “Blind" Willie Dineen brings his Broadway Collective back to the stage of BB's Jazz, Blues and Soups.